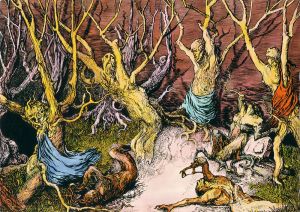 Koboku-no-kai are spirits of old trees in Japanese foklore.

One such tree spirit was encountered by Tarōemon, a man who lived in Niigata prefecture long ago. One drunken night, Tarōemon noticed a prowler standing next to the old tree in front of his house. He stepped outside to confront the stranger, and they started fighting. Tarōemon subdued the man and managed to drag him inside, only to discover that he had transformed into a large tree branch. The next morning, Tarōemon took the branch to a nearby temple. The resident priest told Tarōemon that the old tree in front of his house was occupied by a spirit. After the priest recited a chant, the tree never caused any trouble again.