Kobolds are goblin-like creatures of German folklore that can be found either in houses or in underground mines. 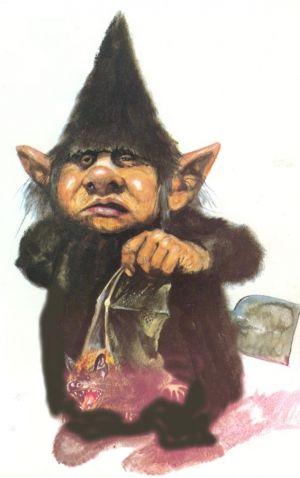 Kobolds are related to the brownies and leprechauns. The most common version, Hinzelmann (plur: Heinzelmännchen), is similar to Robin Goodfellow.

The name comes from "Kobe" = house, hut and the word "hold" = comely, good (Paul Hermann, "Deutsche Mythologie") and is often translated in English as goblin. The name of the element cobalt comes from kobold, after the poisonous and troublesome nature of the typical arsenical ores of this metal (cobaltite and smaltite) which polluted other mined elements (compare nickel).

In the 16th and the 17th century, they were usually depicted on paintings as little devils with a conical hat, pointy shoes, a hairy tail, and bald feet instead of hands.

Kobolds are spirits of ambivalent nature. Like Robin Goodfellow, they may either help or harass humans through they are not considered inherently evil. As household spirits ,they sometimes perform domestic chores, but play malicious tricks if not appeased. Another type of kobold, more similar to the gnome, haunts mines and other underground places.