Toriyama Sekien's illustration of a kodama appearing as an old man.

Kodama are usually invisible but may choose to appear as beautiful or as terrible as they wish. They are sometimes depicted as having an initially adorable humanoid appearance.

Kodama tend to inhabit trees of very great age or size and are surprisingly strong and powerful. It is believed that these spirits may transmigrate to another tree or be reborn through their seed.

Cutting down a tree which houses a kodama is thought to bring misfortune, and such trees are often marked with a sacred rope called shimenawa. Kodama are generally wise and peaceful but dislike those who have no respect for the environment and who take it for granted. Sometimes they mimic human voices, creating echos in the forest. "Echo" has also come to be another meaning of the word kodama. 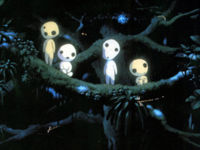 Kodama as depicted in the animated film Princess Mononok.

Part of this article consists of modified text from Wikipedia, and the article is therefore licensed under GFDL.
Retrieved from "https://www.monstropedia.org/index.php?title=Kodama&oldid=11040"
Categories: