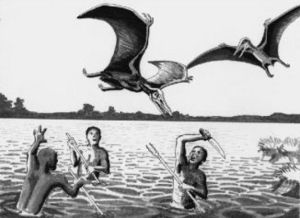 The Kongamato is a pterosaur-like cryptid from the border area of Zambia, Cameroon, Angola and Congo.

Kongamato means 'breaker of boats'. In Kenya the creature is called Batamzinga and in Cameroon, Olitau.

Kongamato was described by the Kaonde people as a huge red lizard with membranous wings, having no feathers at all, like a bat spreading five or more feet, and with teeth in its huge beak. It had a reputation for capsizing canoes and causing death to anyone who merely looked at it.

Kongamato is said to have lived in the Jiundu swamps in the Mwinilunga District in western Zambia, near the border of Congo and Angola.

In 1925, a distinguished English newspaper correspondent, G. Ward Price, was with the future Duke of Windsor on an official visit to Rhodesia. He reported a story that a civil servant told them of the wounding of a man who entered a feared swamp in Rhodesia known to be an abode of demons. The brave native entered the swamp, determined to explore it in spite of the dangers. When he returned he was on the verge of death. He had a great wound in his chest. He recounted how a strange huge bird with a long beak attacked him. When the civil servant showed the man a picture of a pterosaur from a book of prehistoric animals, the man screamed in terror and fled from the servant's home.

Frank Melland, in his 1923 book In Witchbound Africa, describes it as living along certain rivers, and very dangerous, often attacking small boats. It was red, with a wingspan of 4 to 7 feet. Members of the local Kaonde tribe identified it as a pterodactyl after being shown a picture of one from Melland's book collection.

The evidence for the pterodactyl is that the natives can describe it so accurately, unprompted, and that they all agree about it. There is negative support also in the fact that they said they could not identify any other of the prehistoric monsters which I showed them...The natives do not consider it to be an unnatural thing like a mulombe [demon] only a very awful thing, like a man-eating lion or a rogue elephant, but infinitely worse... I have mentioned the Jiundu swamp [northwestern Zambia] as one of the reputed haunts of the kongamato, and I must say that the place itself is the very kind of place in which such a reptile might exist, if it is possible anywhere." (Welland, 1932, pp. 238, 240.)

In 1932-33 the Percy Sladen Expedition journeyed to West Africa in the employment of the British Museum. In charge of the team was Ivan T. Sanderson, a well-known zoologist and writer. While in the Assumbo Mountains in the Cameroons, they made camp in a wooded valley near a steep banked river. One evening, as the team was hunting near the river, Sanderson shot and killed a large fruit-eating bat, and when the animal fell into the water, Sanderson carefully began to make his way over to it in the fast moving current. As he himself writes, he accidentally lost his balance and fell. When regaining his balance, his companion suddenly shouted in horror "Look out!" It was at this time that the aforementioned written occurrence took place, and was a day that Ivan T. Sanderson never forgot.

In 1942 Colonel C. R. S. Pitman reported stories the natives had told him of a large bat/bird type creature that lived in Northern Rhodesia (now Zambia) in a dense swampy region--supposedly to look upon it was death. Tracks of the creatures were seen, with evidence of a large tail dragging the ground. These reports were not limited to Zambia, but also came from other locations in Africa such as Mount Kilimanjaro and Mount Kenya

Dr. J.L.B. Smith (famous for his investigation into the living fossil, the coelacanth) wrote in his 1956 book Old Fourlegs about flying dragons that lived near Mount Kilimanjaro, Tanzania. "...one man had actually seen such a creature in flight close by at night. I did not and do not dispute at least the possibility that some such creature may still exist." (Smith, J.L.B., Old Fourlegs, 1956, pp. 108-109.) Indeed a game warden named A. Blaney Percival stationed in Kenya noted that a huge creature whose tracks only revealed two feet and a heavy tail was believed by the Kitui Wakamba natives to fly down to the ground from Mount Kenya every night (Shuker, Karl, In Search of Prehistoric Survivors, 1995, p. 49.).

In 1956 an engineer, J.P.F. Brown, allegedly saw the creature at Fort Rosebery near Lake Bangweulu, Zambia and reported in the April 2, 1957 Rhodesia Herald. Brown was driving back to Salisbury from a visit to Kasenga in Zaire. He stopped at a location called Fort Rosebery, just to the west of Lake Bangweulu to get his canteen from the trunk. It was about 6:00 p.m. when he saw two creatures flying slowly and silently directly overhead. He observed that they looked prehistoric, with a long tail and narrow head. He estimated a wingspan of about 3-3 1/2 feet. One of them opened its mouth in which he saw a large number of pointed teeth.

In 1957, at a hospital at Fort Rosebery (the same location J. P. F. Brown had reported seeing strange flying creatures the year before) a patient came in with a severe wound in his chest. The doctor asked him what had happened and the native claimed that a great bird had attacked him in the Bangweulu swamps. When asked to sketch the bird, the native drew a picture of a creature that resembled a pterosaur.

Soon afterwards the Zambezi valley was flooded as a result of the Kariba Dam hydroelectric project. Daily Telegraph correspondent Ian Colvin was at the scene, when he took a controversial photograph of what might be a pterosaur.

In 1988, Professor Roy Mackal led an expedition to Namibia where reports of a creature with a wingspan of up to 30 ft were collected. According to eye witnesses, the avian cryptid usually glided through the air, but also was capable of true flight. It was usually seen at dusk, gliding between crevices between two hills about a mile apart. Although the expedition was unsuccessful in collecting solid evidence, one team member, James Kosi, reportedly saw the creature from about 1000 ft. away. He described it as a giant glider shape, black with white markings.

In 1998 Steve Romandi-Menya, a Kenyan exchange student living in Louisiana, declared that the Kongomato is still known to the bush-dwelling people in his country. The creatures are said to feed on decomposing human flesh, digging up bodies if they are not buried to sufficient depth.

There are reports of similar creatures (no details given) from Angola, Zimbabwe, Congo, Namibia, Tanzania and Kenya.

The Kaonde people of the North-Western Province [of Zambia] used to carry charms called "muchi wa Kongamato" to protect them at certain river crossings from the Kongamato.

Suggested identities include a modern-day Rhamphorhynchus, a misidentified bird (such as the very large and peculiar Saddle-billed Stork), or a giant bat. Members of the local Kaonde tribe identified it as a pterodactyl after being shown a picture of one from Melland's book collection.

Although no conclusive evidence has proven the existence of the Kongamato, many believe African locals and travelers have been confusing the creature with two different species of large storks native to the region, the Shoebill and Saddleback.

The shoebill stork is a dark colored bird with a 8 ft. wingspan and a decidedly prehistoric appearance. They have become rare, and can only be found in the deep recesses of swamps in Zambia and neighboring countries. However, there is no evidence of the shoebill behaving aggressively towards humans, and in fact they try to avoid humans as much as possible. They have large bills, but they are not pointed, and they do not have teeth (no known birds living today have real teeth).

Another odd-looking bird that lives in the area is the saddle-billed stork. These rather beautiful birds have a wingspan of up to 8½ feet, a long bright red bill with a horizontal black stripe ¾ up from the tip and with a yellow blaze from the eyes down and into the stripe, with additional orange stripes on the sides of the head. Their overall coloration is black and white with a black head, and featherless red feet. The beak is long and pointed. Although it would be difficult to confuse this bird with a featherless, monotone-colored pterosaur, its beak is similar.