A Korrigan or Corrigan is a type of fairy specific to Britanny (France). There are several types, some of which are the Korils, Poulpikans, Teuz, and Kornikaned. 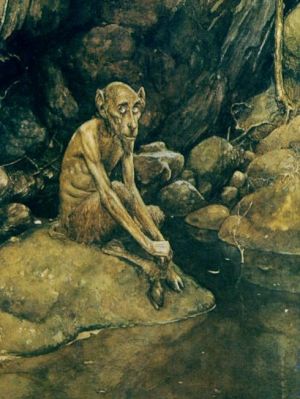 Korr means dwarf and ig is a diminutive whereas the suffix an is an hypocoristic. The term is used variously by different writers on Breton folklore to describe dwarves (nains), lutins or demons. However, the Korrigan has distinctive features. As genius loci, their name change according to the place they are supposed to guard. Among the other names, there are kornandon, ozigan, nozigan, torrigan, viltañs, poulpikan, paotred ar sabad ...

Korrigans have beautiful hair and red flashing eyes. Sometimes depicted with two horns, the feet of a goat and claws like a cat. These little men are able to inflate to a huge size and shapeshift.

Other authors use the term only to refer to sirens and mermaids-like water spirits who inhabit springs and river, sing and comb their long hairs. These creatures are very beautiful when seen at dusk or night, but by day their eyes are red, their hair white, and their skin wrinkled.

Despite their small size, korrigans are stronger than 2 men. They can predict the future, change shape, and move at lightning speed.

Korrigans have the power of making men fall in love with them, but they then kill the ones who do. In many popular tales, they are eager to deceive the imprudent mortals who see them dancing or looking after a treasure, and fond of stealing human children, substituting them with changelings. On the night of 31st October (All Souls' Night), they are said to be lurking near dolmens, waiting for victims.

Under Karnach and Plendren (French Britanny) and the cliffs along the Britanny shore.

Shapeshifters, thieves and villains, korrigans rob humans and children and cast storms. Korrigans are also fond of dancing all night around faerie circles and dolmen. They hate priests, churches, and especially the Virgin Mary.

Korrigan are sometimes described as important princesses or druidesses who were opposed to Christianity when the Apostles came to convert Brittany.

"The Korrigan, our authority further states, can predict the future, assume any form they please, move from place to place with the rapidity of thought, cure maladies by the aid of charms which they communicate to their favourites. Their size is said not to exceed two feet, but their proportions are most exact; and they have long flowing hair, which they comb out with great care.

Their only dress is a long white veil, which they wind round their body. Seen at night, or in the dusk of the evening, their beauty is great; but in the daylight their eyes appear red, their hair white, and their faces wrinkled; hence they rarely let themselves be seen by day.

They are fond of music, and have fine voices, but are not much given to dancing. Their favourite haunts are the springs, by which they sit and comb their hair. They are said to celebrate there every returning spring a great nocturnal festival. On the sod at its brink is spread a table-cloth white as the driven snow, covered with the most delicious viands. In the centre is a crystal cup, which emits such light that there is no need of lamps. At the end of the banquet a cup goes round filled with a liquor, one drop of which would make one as wise as God himself. At the approach of a mortal the whole vanishes.

Like fairies in general the Korrigan steal children, against which the remedy usually employed is, to place the child under the protection of the Virgin, by putting a rosary or a scapulary about its neck. They are also fond of uniting themselves with handsome young men to regenerate, as the peasants say, their accursed race.

The general belief respecting them is, that they were great princesses who, having refused to embrace Christianity when it was preached in Armorica by the Apostles, were struck by the curse of God. Hence it is that they are said to be animated by a violent hatred of religion and the clergy. The sight of a soutane, or the sound of a bell, puts them to flight; but the object of greatest abhorrence to them is the Holy Virgin. The last trait to be noticed of these beings is, that, like similiar beings in other countries, their breath is deadly."