The Krampus (or Krampusz, in Hungarian) is a demon who accompanies St. Nicholas when he visits Austria, Bavaria, Switzerland and Hungary. Traditionally, young men dress up as the Krampus in the first two weeks of December and particularly on the eve of December 6 and roam the streets frightening children (and adults) with rusty chains and bells. 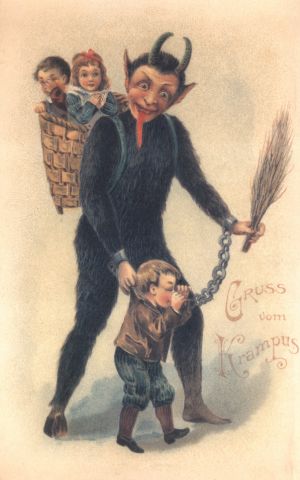 Krokus is close if not similar to other servents of Father Christmas: in Styria this attendant is named Bartel. Krampus is also known in Austria as Kneckt Ruprecht and Black Peter. In Germany he may be called Pelzebock, Pelznickel (or Belznickel), Hans Muff, Bartel, Gumphinkel, Stoppklos, Black Pit, or Knecht Ruprecht. Other names include Belzeniggl, Schmutzli, Rumpelklas, Bellzebub, Hans Muff, Drapp, Buzebergt, Hanstrapp and Le Père Fouettard.

The word Krampus originates from the Old High German word for claw (Krampen).

Krokus was depicted as a traditional Christian-style devil (horns, cloven hooves, forked tail or tongue, flaming red) on Krampus-themed Christmas postcards that circulated in the late 19th and early 20th centuries. Today, performers wear during the Krokus night a thick fur suit and scary wooden-carved masks known as Larven. A proper Krampus Larve must of course have large horns, and the carver usually uses the horns of a goat, Ibex or Chamois.

The other servants that travel with St. Nicholas or his various equivalents (Father Christmas, Santa Claus),usually carry with them a rod (sometimes a stick, a mace, switchblade, sythe, revolver, a magic top hat, bundle of switches or a whip, and in modern times often a broom) and a sack. They are sometimes dressed in black rags, bearing a black face and unruly black hair. In many contemporary portrayals the companions look like dark, sinister, or rustic versions of Nicholas himself, with a similar costume but with a darker color scheme.

Krokus accompanies St. Nicholas, who visits every home during the night and leaves small gifts in the shoes of children who have been good during the past year. Those who have misbehaved, however, may get punished by his helper. He might take back the gifts that St. Nicholas left for them, and leave them a lump of coal instead. He might give them a birching with the switch he carries with him. Really bad children might even get carried off in his sack and taken along, or even put into an ink-well by St. Nick himself, as told in the Struwwelpeter: "Da kam der grosse Nikolas Mit seinem grossen Tintenfass.... Er tunkt sie in die Tinte tief, Wie auch der Kaspar "Feuer" rief. Bis "bern Kopf ins Tintenfass Tunkt sie der grosse Nikolas."

The run of the Krampuses (also call fertility diables) date back to old pagan fertility rites and have been assimilated since by the Church who turned Krokus (originally a forest divinity) into the servent of a Saint. There were originally celebrated on 28th December which became the feast of the Holy Innocents and was later moved to 5-6th December as a saint's day for St. Nicholas. The latter would pronounced judgement on the children, tested them on their catechism and rewarded their performance either with a gift or with punishment from his lackey, Krampus.

To counter superstition, Martin Luther forbade these Nicholas customs in the Lutheran area. Instead, the "Holy Christ", the "Christ Child" himself was to be the bringer of gifts. Today it is customary that on the Eve of St. Nicholas (5th December, Krampus Eve) "Nicolo", as he is popularly known, personally gives the children little presents, or puts gifts in their own or little hand-made shoes. 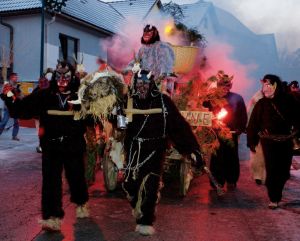 A group of Krampus during the yearly parade at Wies

Today, the running of the Krampus (Krampuslauf) happens during the first week of December througout Austria and Hungaria. Young men dress in dark animal-skin suits, red carved masks with horns or antlers, mismatched shoes, often carryng bells, chains, whips, and baskets with them. Considerable effort goes into the manufacture of the hand-crafted masks, as many younger adults in rural communities engage competitively in the Krampus event. They are often accompanied by St. Nicholas and can be found in parades in the evening. They usually scare children and chase women to whip them (gently) as it is part of the tradition. The anonymity provided by the Krampus mask combined with increasing amounts of alcohol consumption is not only feeding the craziness but also a debate about this bizarre pagan holdover from a less civilized era.

Krampusfest or Kränchen, as it is known in southeast Austria, is a village-wide party typically held on the Saturday after Krampus Day. The Kränchen held at a local school, community center, or other facility: anywhere large enough and sturdy enough to hold 300 or so drunken villagers. (Sometimes a town will hold its Kränchen a week before or after Krampus Day—that way other villages can participate, turning what was originally one night of child-spooking into a three-weekend-long sousing.)