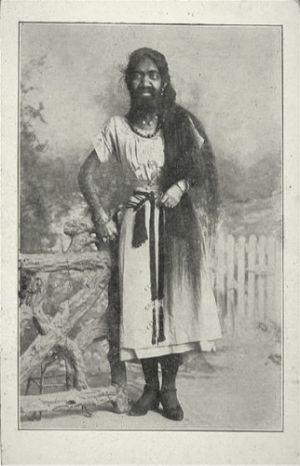 Krao Farini, also known as the missing link, was a sideshow performer and a person born with a rare condition known as hypertrichosis.

Krao was born is Siam, modern day Thailand, in 1876. From birth, the girl was completely covered with hair, including a mane-like track of hair flowing down her back from between her shoulder blades, and she was also endowed with supernumerary teeth, a secondary feature of hypertrichosis, and hyperextensible joints, a common genetic variation in humans. She was first discovered at age six in Laos by a Norwegian explorer, Karl Bock, and his assistant, Professor George Shelly, scouts for the showman G.A. Farini. Farini adopted Krao and first exhibited her, then eleven years old, at the Royal Aquarium at Westminster in London in late 1882. From there she ended up in a dime oddities museum in Philadelphia. In 1885 she left the museum circuit and went on tour with John B. Doris' New Mammoth Shows, a minor Midwestern circus, where she was discovered again by a scout for Ringling Brothers and Barnum & Bailey Circus, and signed as a feature attraction.

Krao established her permanent home in Brooklyn, where she worked at New York City's numerous dime museums and at Coney Island as a bearded lady. She lived with a German couple, Mr. and Mrs. Jacob Zeiler, with whom she was close friends and could converse in German. She had her own apartment in the Zeilers' building, where she cooked and kept house for herself. Her favorite hobby was the violin. "Music makes me happy here," Krao told a reporter in 1903, gesturing to her heart. Entirely self-taught, she played by ear in a style that was more folk than classical. She also loved to crochet and was quite fond of books. On the streets of the city she kept her beard covered with a veil. She also maintained a close friendship with the bearded lady Grace Gilbert until Grace's death in 1924.

While often called ‘The Ape Woman’ Krao was principally advertised as ‘Darwin’s Missing Link’. To all those who saw her, she was proof of Darwin’s ideas. It was claimed, somewhat ridiculously, that Krao was of a race of tree dwelling, ape-like people but many bought the story – including noted naturalists and scientists. Many papers and theses were composed about Krao and her existence as Darwinian evidence, including the 1896 book Anomalies and Curiosities of Medicine which states her many ape qualities including her ‘prehensile feet’.

Unlike other human oddities and living attractions, Krao was never exploited by her promoters - she performed and displayed herself according to her own rules and terms, and lived an independent life outside the sideshow. She spent the last 20 years of her life in a private apartment, entertaining guests and neighbors with her cooking and charming personality.

Krao never married, although she had admirers, and she passed due to influenza on April 16th, 1926.