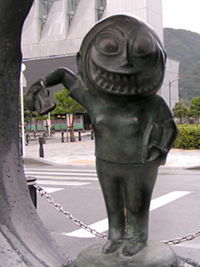 Kuchisake-onna (口裂け女,"Slit-Mouth Woman") is the ghost of a woman, mutilated by a jealous husband, and returned as a malicious spirit.

The legend is said to originate with a young woman who lived hundreds of years ago (some versions of the legend state the Heian period) and was either the wife or concubine of a samurai. She is said to have been very beautiful but also very vain, and possibly cheating on her husband. The samurai, extremely jealous and feeling cuckolded, attacked her and slit her mouth from ear to ear, screaming "Who will think you're beautiful now?"

The urban legend picks up from this point, stating that a woman roams around at night (especially during foggy evenings), with her face covered by a surgical mask, which would not be especially unusual, as people with colds often wear masks for the sake of others in Japan. When she encounters someone (primarily children or college students), she will shyly ask, "Am I beautiful?" ("Watashi kirei?"). If the person answers yes, she will take off her mask and say, "Even like this?" At this point, if the victim answers "No," she will slay them (in many versions, her weapon is a pair of scissors). If the victim tells her she is pretty a second time, she follows the victim home and slays them in their own doorway, due to the fact that "kirei" , Japanese for 'pretty,' is a near homophone of "kire", the imperative form of "to cut".

During the seventies, the urban legend went that if the victim answers "You're average", they are saved. When the urban legend was revived around 2000, the answer that would save you was changed to "so-so," with the change that this answer causes the kuchisake-onna to think about what to do, and her victim can escape while she is in thought.

One way to escape is to present the Kuchisake-onna with amber, hard candy. Another is to say "pomade" three times (in some versions, six times). This will make her either falter and turn or run away. If the victim has pomade, they can write with it behind her back to keep her from following. The reason is rumored to be that this reminds her of either the dentist's or (plastic) surgery smells, or that her boyfriend used it.

During the spring and summer of 1979, rumors abounded throughout Japan about sightings of the Kuchisake-onna having hunted down children.

In October of 2007, a coroner found some old records from the late 1970's about a woman who was chasing little children, but was hit by a car, and died shortly after. Her mouth was ripped from ear to ear. It is believed that she caused the panics around that time.

In 2004, a similar legend spread throughout cities in South Korea of a red-masked woman, though this may have been fueled by tales of the 1979 cases in Japan, as well as a 1996 Japanese film (see below).

Part of this article consists of modified text from Wikipedia, and the article is therefore licensed under GFDL.
Retrieved from "https://www.monstropedia.org/index.php?title=Kuchisake-onna&oldid=11048"
Categories: