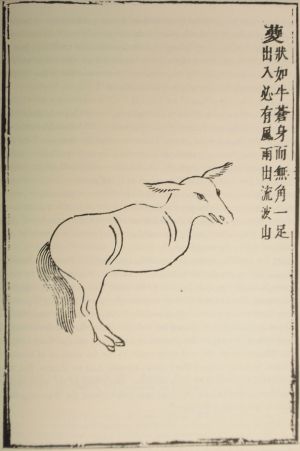 Kui from a 1786 edition of shanhaijing

Kui (Chinese: 夔; pinyin: kuí; Wade-Giles: k'uei) is a polysemous figure in ancient Chinese mythology. Classic texts use this name for the legendary musician Kui who invented music and dancing; for the one-legged mountain demon or rain-god Kui variously said to resemble a Chinese dragon, a drum, or a monkey with a human face; and for the Kuiniu wild yak or buffalo.

The K'uei envies the millipede, the millipede envies the snake, the snake envies the wind, the wind envies the eye, and the eye envies the mind. The K'uei said to the millipede, "I have this one leg that I hop along on, though I make little progress. Now how in the world do you manage to work all those ten thousand legs of yours?" The millipede said, "You don't understand. Haven't you ever watched a man spit? He just gives a hawk and out it comes, some drops as big as pearls, some as fine as mist, raining down in a jumble of countless particles. Now all I do is put in motion the heavenly mechanism in me ‑ I'm not aware of how the thing works."

Duke Huan said, "But do ghosts really exist?" "Indeed they do. There is the Li on the hearth and the Chi in the stove. The heap of clutter and trash just inside the gate is where the Lei‑t'ing lives. In the northeast corner the Pei‑a and Kuei‑lung leap about, and the northwest corner is where the I‑yang lives. In the water is the Kang‑hsiang; on the hills, the Hsin; in the mountains, the K'uei; in the meadows, the P’ang‑huang; and in the marshes, the Wei‑t'o."

Ki Hwan-tszĕ, a grandee of the state of Lu, caused a well to be dug, when they fetched up something like an earthen pot with a goat in it. He had Chung-ni (Confucius) interrogated about it, in these words: "I dug a well, and got a dog; tell me what this is." On which the Sage answered: "According to what I have learned, it must be a goat; for I have heard that apparitions between trees and rocks are called khwei and wang-liang, while those in the water are lung or dragons, and wang-siang, and those in the ground are called fen-yang.

Some say that the khwei have one leg. The people of Yueh (Chehkiang and northern Fuhkien) style them 繅 (sao) of the hills, which character occurs also in the form 獟 (siao). They exist in Fu-yang (about the present Hang-cheu), have a human countenance and an ape-like body, and can speak. Some say that the one-legged wang-liang are spirits (tsing) of the hills, who by imitating human voices bewilder people. (tr. Groot 1910:5:498)