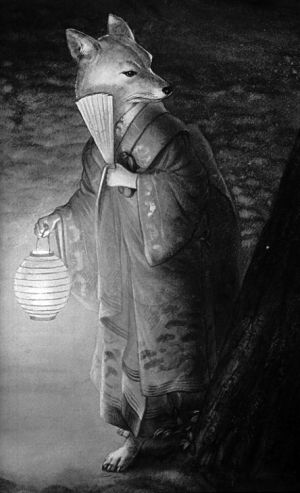 The kumiho (literally nine tailed fox) is a shapeshifter that appears in the oral tales and legends of Korea.

According to those tales, a fox that lives a thousand years turns into a kumiho, like its Japanese and Chinese counterparts (the kitsune and the huli jing). It can freely transform, among other things, into a beautiful girl often set out to seduce men, and eat their liver.

The Kumiho was thought to grow wise with age and with enough training, eventually learn to morph itself into various forms, including human. Thus they are often depicted as beautiful young maidens that trick unsuspecting men and later consume their hearts.

While the kumiho is capable of changing its appearance, there is still something persistently fox-like about it. In Transformation of the Kumiho (구미호의 변신), a kumiho transforms into an identical likeness of a bride at a wedding. Not even the bride's mother can tell the difference. The kumiho is only discovered when her clothes are removed.

Bakh Mun-su and the Kumiho (박문수와 구미호) records an encounter that Pak Munsu has with a girl, living alone in the woods, that has a fox-like appearance.

In The Maiden who Discovered a Kumiho through a Chinese Poem (한시로 구미호를 알아낸 처녀) the kumiho was ultimately revealed when a hunting dog caught the scent of the fox and attacked.

Although it is typically depicted as a woman when it transforms into a human being, the kumiho in the tale of The Maiden who Discovered a Kumiho through a Chinese Poem (한시로 구미호를 알아낸 처녀) turns into a young man that attempts to trick the maiden in marrying him. However, this is the only case in which it transforms into a male.

It is unclear at which point in time Koreans began viewing the Kumiho as a purely evil creature, since many of the ancient texts mention benevolent Kumihos assisting humans. In fact many of the older texts make more frequent mention of wicked humans tricking kind but naïve Kumihos.

As the mythology of the Kumiho evolved it was later believed that a Kumiho had to consume human hearts in order to survive. In later literatures they are often depicted as flesh-hungry half-fox, half-human things that wandered the cemeteries at night, digging human hearts out from graves.

Another version was that the Kumiho must eat livers. This was because the liver contained the energy of a human, meaning that it processes the food and gives energy, thus making it the container of the working force/life of a human. The fairy tale The Fox Sister depicts a fox spirit preying on a family for livers.

Another version of the mythology, however, holds that with enough will a Kumiho could further ascend from its Yokwe state and become fully, permanently human and lose its evil character. Explanations of how this could be achieved vary, but they sometimes include aspects such as refraining from killing or tasting meat for a thousand days, or obtaining a cintamani(여의주) and making sure that the Yeoiju saw the full moon at least every month during the ordeal. Unlike Yeoiju wielding dragons, Kumiho were not thought to be capable of omnipotence or creation at will since they were lesser creatures.

In The Hunter and the Kumiho (P'osuwa kumiho), a hunter comes upon a fox scratching at a human skull in the woods. Before his eyes, the fox changed into an old woman and went down into a nearby village (the scratching of the skull and the subsequent metamorphosis introduces an element of sympathetic magic into the kumiho's transformation, but there is not space enough here to flesh out this aspect). The hunter followed and saw her "reunited" with her children, who had puzzled over her absence of several months. The hunter was able to warn the children that their mother had been killed by the kumiho, and the kumiho intended them to be her next victims.

The Emperor's Kumiho Daughter-in-Law tells of us a Chinese emperor's son who married a kumiho. After the marriage, the country's retainers mysteriously began to die one by one. The tale's hero eventually discovered the kumiho and was given permission by the emperor to kill it and save the remaining retainers.

The kumiho of The Kumiho and the Samjokku (Three-legged Dog) (Kumihowa samjokku) is married to another Chinese emperor, and she shows vampiric tendencies in wanting to suck the blood from her intended victim, the hero of the tale (she is foiled by the hero's three-legged dog, who attacks and kills her).

The Fox with Nine Tails is a 1994 film directed by Park Heon-Su about a kumiho who must have sex with human men in order to become human herself.