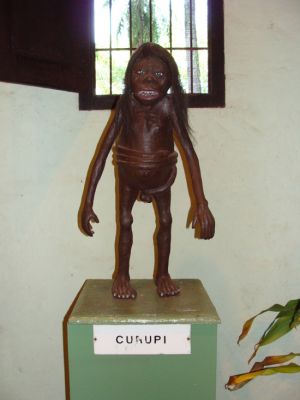 Kurupira is a notorious creature in Guaraní mythology.

Kurupira is one of the seven monstrous children of Tau and Kerana.

Kurupi is said to be short, ugly, and hairy. He makes his home in the wild forests of the region, and as such was considered to be the lord of the forests and protector of wild animals. Kurupi's most unique feature, however, was an enormous penis that was ordinarily wound several times around his waist like a belt. As such, he was at one time revered by the Guaraní as the spirit of fertility.

Much like the Pombero, Kurupi is often blamed for unexpected or unwanted pregnancies. His penis is said to be prehensile, and owing to its length he is supposed to be able to extend it through doors, windows, or other openings in a home and impregnate a sleeping woman without even having to enter the house. Together with the Pombero, Kurupi was a scapegoat used by adulterous women to avoid the wrath of their husbands, or by single women to explain their pregnancies. Children fathered by the Kurupi were expected to be small, ugly and hairy much like their father, and if male to inherit something of their father's virility. In some cases, Kurupi is blamed with the disappearance of young women, supposedly stealing them away to his home in the forest for use in satiating his libidinous desires.

The legend of Kurupi has faded somewhat in comparison to the Pombero, and figures more often as part of old tales. Rarely is he blamed with impregnating women anymore, although he is sometimes used to try and frighten young girls into being chaste.