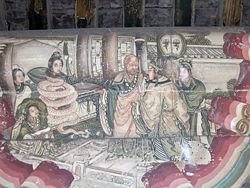 Image from the Summer Palace, Beijing, China, depicting the legend

At its most basic, the story tells of a young scholar who falls in love with a beautiful woman, unaware that she is a white snake who has taken on human form. A monk intervenes in order to save the scholar's soul and casts the white snake into a deep well at the Leifeng Pagoda.

Over the centuries the story has evolved from horror story to romance with the scholar and the white snake-woman genuinely in love with one another, but such a relationship is forbidden by the laws of Heaven. There have also been variations on the telling of the story: like the scholar adopting the white snake as a pet while still a schoolboy; or himself being banished from Heaven and becoming a mere human on Earth.

An added character is a green snake (or in some cases a carp) who has also been turned into a woman and serves as the white snake-woman's soul sister and confidante.

The story begins with White Snake, residing in the heavens, falling in love with an Immortal, Xu Xian. This is against heaven's law, so she is imprisoned in a Lily Pond, while Xu Xian is exiled from heaven, and made into a human. It takes her twenty years, but she is able to free herself from the pond using her magical powers. She heads down to earth, intent to re-unite with Xu Xian, transforming herself to a human being as well.

On her way to earth, White Snake meets and frees Green Snake, who is imprisoned in the Sea Kingdom for causing problems there. Green agrees to become her handmaiden, and together they go to the Broken Bridge in West Lake, to find White's former love.

White discovers Xu Xian as a poor scholar. He does not recall his previous life as an immortal. White creates a boat and boatman to pick up Xu Xian and ferry him across the lake (so, even in this version of the tale, the scholar still meets the snake woman on the shore of the lake). Rain pours down, and he offers her his umbrella. Xu Xian falls in love, and Green Snake acts as a matchmaker to marry the two lovers.

Madam White and Xu Xian open a medicine shop, providing much help for the sick and poor for free. This attracts the attention of the Buddhist monk Fa-Hai, since less people are coming to the Monastery and he isn't getting as much money as he used to. (This is especially so in versions of the opera where the Monk has fully taken the role of the villain, and White Snake, the heroine. Other opera versions still depict the Monk taking an interest in the salvation of the scholar Xu Xian).

Then, on the eve of the Dragon Boat Festival, White and Xu Xian drink some of the festivals special realgar wine together (spiked, as some versions have it, by the malicious monk). Realgar (arsenic sulfide) was believed in Chinese medicinal practices to be an antidote to all poisons and was said to drive away evil. So when White drinks it, she loses control over her form and hides in the bedroom. Xu Xian, curious, takes a peek and sees a large white snake coiled on the bed. At which point, he has a heart attack and drops dead. When White recovers, she is grief stricken, and resolves to travel to the Kun Lun mountains to steal a magic herb which will bring her husband back to life. The heavenly guards stop her, and she is almost killed, but at the last moment, the God of Longevity intervenes and, taking pity on her plight, gives her the herb, which she uses to revive poor weak-hearted Xu Xian. She makes up some elaborate story about what it was he must have seen, and he is convinced.

But the monk Fa-Hai at last confronts Xu Xian about what his wife truly is. Xu Xian's reaction is one of the greatest transformations of the White Snake Legend -- first outright fright, then fear and concern for his spiritual well-being, and at last, in versions such as the one I am describing here, he decides his love is strong, and will endure no matter what his wife truly is. The monk captures Fa-Hai for his own good and takes him to the monastery. Green and White find out and attack the monk, with all the watery creatures of their kingdom coming to their aid. But White cannot continue the fight, she is weakened -- because she is pregnant with Xu Xian's child.

After she gives birth, she is captured by Fa-Hai and imprisoned under a pagoda. Xu Xian renounces the world and becomes a monk. Many years later, he is a scholar who has passed his examinations at the highest level. He visits his mother at the pagoda, pleads with Buddha, and she is released, and allowed to return to heaven. 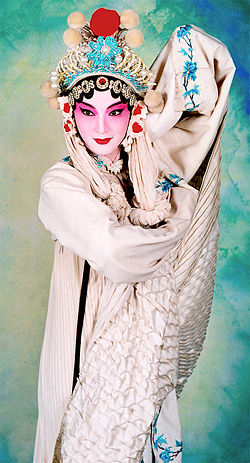 A comedian from the Peking opera