The Lamassu or Shedu is a hybrid bull man considered as a protective demon in Mesopotamian and Akkadian mythology. 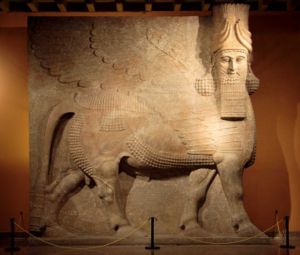 The Sumerian word lama, which is rendered in Akkadian as lamassu, refers to a beneficient protective female deity. She is often represented as a standing figure that introduces guests to another, superior god. Her male counterpart is called alad or, in Akkadian, šêdu. In Akkadian, he is also called Gud-elim, or "The Horned Bull".

In art lamassi (pl.) were depicted as winged bulls or lions; both forms had the heads of human males. There are still surviving figures of šêdu in bas-relief and some statues in museums. Notable examples of šêdu/lamassu held by museums include those at the British Museum, Musée du Louvre, Metropolitan Museum of Art and one extremely large example kept at the Oriental Institute, Chicago.

The beast composition is powerfully evocative of strength (body of lion / bull), speed (an eagle's wings) and intelligence (human head).

The bull man helps people fight evil and chaos. He holds the gates of dawn open for the sun god Shamash and supports the sun disc. Lamassu served as a symbol for the power of the Assyrian kings who ruled that vast empire centred in northern Iraq from the 9th to 7th centuries BC.

As protective deities or genii, larger than life-size statue-blocks of lamassi were placed on either side of late Assyrian palace doorways and entrances in order to guard against the entry of evil and chaotic forces. At the entrance of cities the gatekeepers were sculpted in colossal size, and placed as a pair, one at each side of the door of the city, that generally had buttdoors in the surrounding wall, each one looking towards one of the cardinal points.

Over time it evolved into a friendly, protective demon. To protect houses the shedu were engraved in clay tablets as apotropaic objects that were buried under the door's threshold.

During the Neo-Assyrian Empire (c.883-612), large monumental bulls, often with wings and always with human heads, were placed as gateway guardians at the entrances of royal palaces like Khorsabad and Nineveh. Lammasu's are also known from the palaces of the Achaemenid kings. Those in Pasargadae have now disappeared, but in Persepolis, we can still see them in the Gate of all nations. The hoofs are visible in the Unfinished gate; in the building that is identified as either a Council Hall or a Tripylon ("triple gate"), lamassu's served as the capitals of columns.

Each monolithic colussus was carved partly in relief and partly in the round from a single block of stone, measuring up to 5.50 m2 in size. Initially carved roughly in the quarry, each statue-block was transported to its final location (often by river), where it would be set in place and be subjected to fine carving.

Part of this article consists of modified text from Wikipedia, and the article is therefore licensed under GFDL.
Retrieved from "https://www.monstropedia.org/index.php?title=Lamassu&oldid=9746"
Categories: