A demon shapeshifting trickster from Flanders, who appears in many Belgian folk stories, particularly in the Antwerp area. 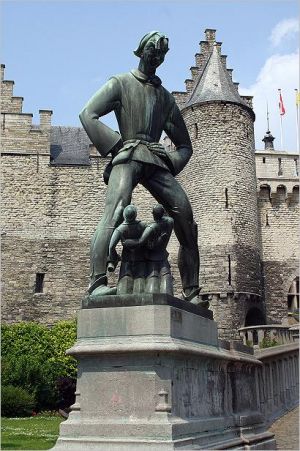 Looks like a normal human, but can make himself as small as a child or as big as a giant.

Lange Wapper is delighted in playing tricks and scaring people. He likes to taunt his victims, leaping over their houses and pressing his face against the windows, or bending over the roads they walk by. He once picked up a fishing boat by the mast and hurled it through the air. At night he peeps into houses to scare the women and he is lurking youngsters into sin by gambling and drinking. He has got a special dislike to drunkards.

He appears in the Suske and Wiske comic book "De Zwarte Madam" (The Black Lady). In this story Lange Wapper is best friends with Kludde, a water demon with a fish's tail from the Dendermonde area.