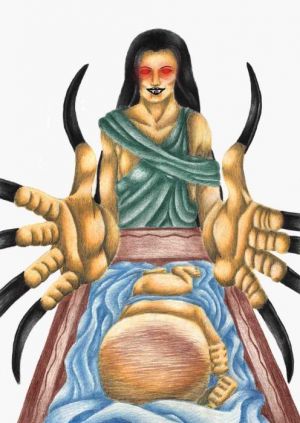 The Langsuir or Langsuyar is a Malay vampire that originates from women who had laboring sickness (meroyan) as a result of suffering the death of their children and who themselves died afterwards.

The langsuir appears as a woman with long nails and flying black hair. She may also shapeshift into a night owl with long claws.

Just like the pontianak, the Langsuir also sucks the blood of living infants. The Langsuir can be stopped or, more precisely, 'domesticated 'if the right means are adopted. For if you are able to catch her, cut short her nails and luxuriant tresses, and stuff them into the hole in her neck, she will become tame and indistinguishable from an ordinary woman, remaining so for years.

Cases have been known, indeed, in which she has become a wife and a mother, until she was allowed to dance at a village merry-making, when she at once reverted to her ghostly form, and flew off into the dark and gloomy forest from whence she came.

The popular superstition about the Langsuir is thus described by Sir William Maxwell:

“If a woman dies in childbirth, either before delivery or after the birth of a child, and before the forty days of uncleanness have expired, she is popularly supposed to become a langsugyar, a flying demon of the nature of the ‘white lady’ or ‘banshee’.

To prevent this a quantity of glass beads are put in the mouth of the corpse, a hen’s egg is put under each arm-pit, and needles are placed in the palms of the hands. It is believed that if this is done the dead woman cannot become a langsuyar, as she cannot open her mouth to shriek (ngilai) or wave her arms as wings, or open and shut her hands to assist her flight.

In one version, the Langsuir was a woman of exquisite beauty and charm who, upon hearing the news of her child's stillbirth, died of shock and became a demon. Upon hearing the news, the woman claps her hands and flies off to a tree where she perches. The stillborn child becomes the Pontianak. The Langsuir wears a beautiful robe of green and possesses long, tapering nails and flowing black hair- which conceals a "feeding hole" in the back of her neck, which she uses to suck the blood of young children.