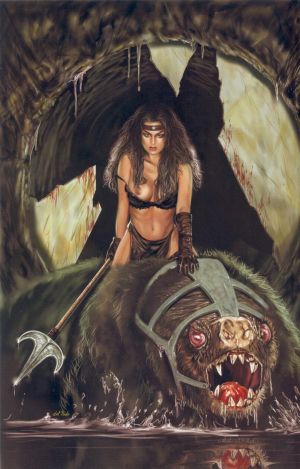 The lavellan was generally considered to be a kind of rodent, and indeed the name "làbh-allan" is also used for a water shrew or water vole in Scottish Gaelic. It was however, reportedly larger than a rat, very noxious, and lived in deep pools in rivers.

The lavellan poisonous abilities were legendary, and it was said to be able to injure cattle over a hundred feet away. Pennant claims the locals preserved the skin, and, as a cure for their sick beasts, gave them the water in which it had been dipped.

Some sources claim that the lavellan was mostly to be found in Caithness. Thomas Pennant made enquiries about the animal while in Ausdale in the county, and it is also mentioned in the work of Rob Donn, the Scottish Gaelic poet from Sutherland.

Part of this article consists of modified text from Wikipedia, and the article is therefore licensed under GFDL.
Retrieved from "https://www.monstropedia.org/index.php?title=Lavellan&oldid=11820"
Categories: