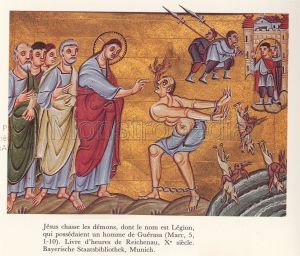 Legion, also known as the Gadarene demon, or translated as Lots, is a demon found in the Christian Bible in Mark 5:9 and Luke 8:30.

The story refers to a famous exorcism performed by Jesus on a possessed man.

And he asked him, What is thy name? And he answered, saying, My name is Legion: for we are many. (KJV) [it is argued that the phrasing is, "we are legion, for we are many"]

Another version of the quotation is in Luke 8:30:

And Jesus asked him, saying, What is thy name? And he said, Legion: because many devils were entered into him. (KJV)

In some versions of the Bible, the quotation is different:

We are mob, for there are so many of us

The demons that composed Legion were aware of the tremendous power of Jesus, and begged to be spared from being tossed back into the bottomless pit of Hell. Jesus instead cast the demons out of the man and, granting their request, allowed them to dwell in a herd of pigs. The pigs then drowned themselves in the Sea of Galilee.

A parallel version of the story can be found in Matthew 8:28-34, but this version does not contain the name "Legion" and tells of two men, not just one, possessed by a multitude of demons. In the story, Jesus traveled to "the country of the Gadarenes" (Luke 8:37), "the country of the Gergesenes" (Matthew 8:28), or "the region of the Gerasenes" (Mark 5:1) and met a man possessed by an evil spirit, which spoke to Jesus in a conversation. The most commonly quoted version is found in Mark 5:9:

John Dominic Crossan believes the story may be considered a parable of anti-Roman resistance. This would explain why the Gospels variously situate the story in Gadara, Gerasa and Gergesa: All three would be disguises for Caesarea, the location he postulates for the actual events behind the story.

Joseph Atwill in his book Caesar's Messiah, believes that the story is a representation of Titus Vespasianus, as the messiah (see also Josephus' Jewish Wars 6.5.4), and the invading Roman Legions in dealing with the Zealots and their insurrection in Caesarea. The pigs may also be an allusion to Legio X Fretensis, which occupied Jerusalem after AD 70, and had the boar as one of its symbols.

Some works of fiction had taken "Legion" as the proper name of a demon. For example, William Peter Blatty's sequel to The Exorcist (the basis for the 1990 The Exorcist III, which he also directed) is called Legion. The collective aspect can be emphasized such as in Gamera 2: Attack of Legion, the second film in the heisei Gamera series, that uses the first biblical quote to introduce the space insects Legion.

Part of this article consists of modified text from Wikipedia, and the article is therefore licensed under GFDL.
Retrieved from "https://www.monstropedia.org/index.php?title=Legion&oldid=14134"
Categories: