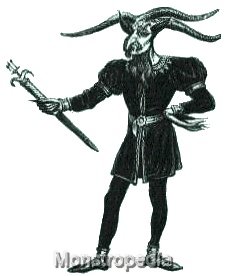 Leonard or Master Leonard is a demon or spirit in Collin de Plancy's Dictionnaire Infernal.

Leonard is demon of the first order, grand master of the sabbaths, chief of the subaltern demons, and inspector general of sorcery, black magic and witchcraft.

Leonard is an hybrid demon with a goat body from the waist up and a black human face topped by three horns. He has been known to appear as a handsome soldier, a favorite of many demons. In this form he will seduce a young lady and take her to the wilderness where he will lay with her and ejaculate cold semen. Any child resulting from this union will be stillborn, an offering for sin, again echoing loosely the story of Aaron.

Infernal powers obtained from the worship of Master Leonard range from metamorphosis into animals or men to flight as an incubi.

Leviticus 16:8 And Aaron shall cast lots upon the two goats; one lot for the LORD, and the other lot for the scapegoat.

9 And Aaron shall bring the goat upon which the LORD'S lot fell, and offer him for a sin offering.
0 But the goat, on which the lot fell to be the scapegoat, shall be presented alive before the LORD, to make an atonement with him, and to let him go for a scapegoat into the wilderness.

To Sabbaths dreamed in this manner we must refer the accounts of a goat issuing from pitchers and going back into them after the ceremony; infernal powders obtained from the ordure of this goat, who is called Master Leonard; banquets where abortions are eaten without salt and boiled with serpents and toads; dances, in which monstrous animals or men and women with impossible shapes take part; unbridled debauches where incubi project cold sperm. Nightmare alone could produce or explain such scenes.

Often called "le Grand Negre" (The Black Man), From the waist up, Leonard has a goat's body with three horns on his head, a goat's beard, hair-like bristles, two ears like a fox, and flaming eyes. He also bears a face on his butt, which witches kiss while holding a green candle to adore him. Leonard can take the form of a bloodhound, an ox, a black bird, or a tree trunk with a gloomy face. When he attends the sabbath, he has the feet of a goose, although experts claim that he has no feet when in tree trunk form. Leonard's attitude is reserved and melancolic, but when he appears at sabbaths, he is commanding and uses situations to his advantage. Dictionnaire Infernal Dictionnaire Infernal - Collin de Plancy (1863)