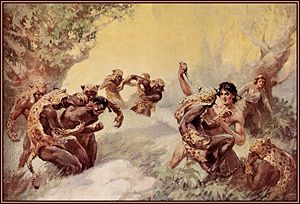 The Leopard men (or were-leopards) belonged to a West African secret society that was active in Sierra Leone, Liberia and Côte d'Ivoire.

Leopard men were believed to be ordinary men that would disguise in were-leopards to commit murders.

In other areas, the creature is believed to be a leopard god or goddess masquerading as human. When these gods mate with humans, offspring can be produced, and these children sometimes grow up to be shapeshifters. Any of them who never transform will have other powers.

Members would dress in leopard skins, waylaying travellers with sharp claw-like weapons in the form of leopards' claws and teeth. They would ritually mutilate their enemies in emulation of the beasts into whose likeness they claim the ability to transform themselves. Victims' flesh would be cut from their bodies and distributed to members of the society. In theory the ritual cannibalism would strengthen both members of the society as well as their entire tribe.

A handsome stranger once came into a certain village and strolled about among the people in mysterious silence. All the maidens admired him and wished that he would choose one of them for his bride. But he said nothing, and at last walked away into the forest and disappeared from sight.

A month later the stranger came again, and this time one of the maidens fell so much in love with him that she resolved to follow him into the forest, as she could not bear to be separated from him.

When the stranger looked back and saw her coming behind him, he stopped, and begged her to return home; but she would not, and exclaimed, "I will never leave you, and wherever you go, I will follow."

"Beautiful maiden, you will regret it," replied the stranger sadly, as he hurried on.

After a while he stopped again, and once more begged her to retrace her steps. But she made the same reply, and again the handsome stranger said in sorrowful tones, "You will regret it, beautiful maiden!"

They went far into the depths of the forest, and at length reached a tree at the foot of which there lay a leopard skin. Standing under the tree, the stranger began to sing a melancholy song, in which he told her that though he was allowed once a month to wander about in villages and towns like a man, he was in reality a savage leopard and would rend her in pieces as soon as he regained his natural form.

With these words he flung himself upon the ground, and immediately become a snarling leopard and began to pursue the terrified girl.

For a great distance they ran, and then the maiden suddenly came to a deep but narrow river, which she could not cross. It seemed as if the leopard would catch her after all. But a tree, which stood on the riverbank, took pity on her and fell across the river, so that she was able to cross.

At last, nearly exhausted, she came to the edge of the forest and reached the village in safety. The leopard, disappointed of its prey, slunk back into the forest, and the handsome stranger was never seen again.