In Greek mythology, the Lernaean Hydra was an ancient serpent-like chthonic water beast that possessed numerous heads;the poets mention more heads than the vase-painters could paint and poisonous breath (Gaius Julius Hyginus). The Hydra of Lerna was killed by Heracles as one of his The Twelve Labours. 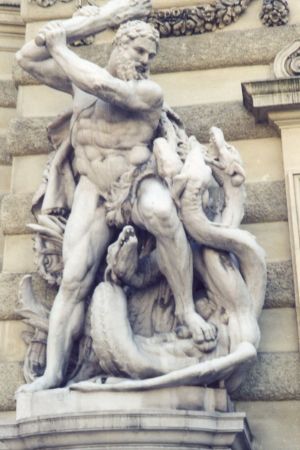 The Hydra had the body of a serpent (sometimes represented as a dog) and many heads (the number of heads deviates from five up to one hundred but generally nine is accepted as standard).

The Hydra was the daughter of Echidna and Typhon and the half-sister of the Nemean Lion, the Chimera and Cerberus. As such, it was said to have been chosen as a task for Heracles so that Heracles would probably die.

The hydra’s heads could never be harmed by any weapon, and if any of the other heads were severed another would grow in its place. Also the stench from the Hydra's breath was enough to kill man or beast. The foul stench that the river of Elis, Anigrus, exudes is said to be the smell of the decaying Hydra.

When it emerged from the swamp it would attack herds of cattle and local villagers, devouring them with its numerous heads. It totally terrorized the vicinity for many years.

Its lair was the lake of Lerna formed by the Amymone spring in the Argolid, though archaeology has borne out the myth that the sacred site was older even than the Mycenaean city of Argos, for Lerna was the site of the myth of the Danaids. Beneath the waters was an entrance to the Underworld, and the Hydra was its guardian (Kerenyi 1959, p. 143...)

The Second Labour of Hercules: The Lernaean Hydra

Upon reaching the swamp near Lerna where the Hydra dwelt, Heracles covered his mouth and nose with a cloth to protect himself from the poisonous fumes and fired flaming arrows into its lair, the spring of Amymone, to draw it out. He then confronted it, wielding a harvesting sickle in some early vase-paintings; Ruck and Staples (p. 170) have pointed out that the chthonic creature's reaction was botanical: upon cutting off each of its heads he found that two grew back, an expression of the hopelessness of such a struggle for any but the hero, Heracles.

The details of the confrontation are explicit in Apollodorus (2.5.2): realising that he could not defeat the Hydra in this way, Heracles called on his nephew Iolaus for help. His nephew then came upon the idea (possibly inspired by Athena) of using a burning firebrand to scorch the neck stumps after decapitation, and handed him the blazing brand. Heracles cut off each head and Iolaus burned the open stump leaving the hydra dead; its one immortal head Heracles placed under a great rock on the sacred way between Lerna and Elaius (Kerenyi1959 p 144), and dipped his arrows in the Hydra's poisonous blood, and so his second task was complete.

The alternative to this is that after cutting off one head he dipped his sword in it and used its venom to burn each head so it couldn't grow back.

The poisonous arrows were used to kill Geryon. Heracles later used another arrow dipped in the Hydra's poison blood to kill the centaur Nessus; and Nessus's tainted blood applied to the Tunic of Nessus eventually killed Heracles himself.

In an alternative version, Hera's crab was at the site to bite his feet and bother him, hoping to cause his death. Hera set it in the Zodiac to follow the Lion (Eratosthenes, Catasterismi)

When Eurystheus, the agent of ancient Hera who was assigning to Heracles The Twelve Labours, found out that it was Heracles' nephew who had handed him the firebrand, he declared that the labour had not been completed alone and as a result did not count towards the ten labours set for him. The mythic element is an equivocating attempt to resolve the submerged conflict between an ancient ten Labours and a more recent twelve.

In another version {seen mostly in psychoanalytical and astrological interpretations of the myth, for example - The Labours of Hercules: An Astrologoical Interpretaton by Alice A. Bailey}, Heracles defeated the Hydra by remembering the words of his wise teacher, Chiron, who had said, "We rise by kneeling; we conquer by surrendering; we gain by giving up."

All his other weapons having failed, Heracles remembered his mentor's words and knelt down in the swamp and lifted up the monster by one of her heads into the light of day, where she began to wilt. Heracles then cut off each of her heads, dipping his arrows in the Hydra's poisonous blood at the same time. However, none re-grew. After he had severed all nine heads, a tenth one appeared; Heracles recognised this as a jewel and buried it under a rock.

An African Hydra is a water-monster with seven heads. It keeps the river flowing and people brought offerings to them. One day a woman asked for the Hydra's help, in return for her Jinde Sirinde. Her water jar had been filled with mud. The Hydra agreed to the deal, cleaning out her jar, and filling it with water for her. When Jinde was old enough, she was sent to the river to collect water but eventually the Hydra came to the shore and took her away to be his wife. Jinde pleaded with him to be allowed to go back. The Hydra agreed to let her go for one day to see her parents one last time but she went to the house of her lover, who took his sword and killed the Hydra by cutting off all seven heads.

The Beast that appears in the Apocalypse is a many-headed dragon. 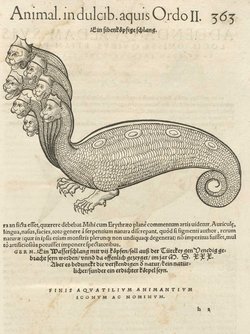 The 16th-century German illustrator has been influenced by the Beast of Revelation in his depiction of the Hydra.

Mythographers relate that the Lernaean Hydra and the crab were put into the sky after Heracles slew them. It is uncertain as to what the cauterising of the snake heads means, but it may derive from tales concerning a battle connected to Lerna, possibly indicative of setting fire to parts of the enemy (possibly the corpses) so as to disperse them.

Lerna features in another myth as a fountain from Poseidon created in memorial of the daughter of Danaos, who appear in earlier works, such as the Illiad, as a seafaring group from elsewhere), which may be a myth of a failed attack on the native population by Danae, which the Danae later repeated successfully.

The Greek word for arrow, which is toxon, is closely related to the Greek word for poison, which is toxis, thus the poison arrows that Heracles created from the Hydra's blood. Associations with the Nemaean lion may derive from recreating the surrounding narrative to suit an order in which the tale of the Hydra follows that of the lion.

The Hydra is represented in many statues and sculptures, often battling Hercules. There are several statues portraying the battle between the two at the Louvre.

In many RPG's set in a Fantasy setting, the Hydra is a common type of monster that can be faced by players. Depending on the setting, they typically have three to seven heads, and may or may not be able to regenerate into more.

Part of this article consists of modified text from Wikipedia, and the article is therefore licensed under GFDL.
Retrieved from "https://www.monstropedia.org/index.php?title=Lernaean_Hydra&oldid=9755"
Categories: