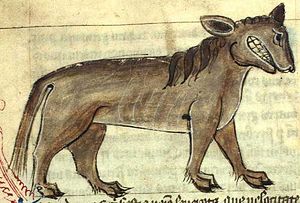 The leucrota is a swift beast that lives in India. It is a composite animal, the result of a mating between a crocotta and a lioness, the same size as an ass, but with a horse's head, chest and legs like a lion, hind quarters like a stag, and cloven hoofs.

It has an extremely wide mouth, that stretches from one ear to the other. Instead of teeth it had ridges of bone that could crush anything. It was said to never close its eyes and its backbone was said to be so rigid that it had to turn around to see what was behind it. Like the hyena, the leucrota can make sounds that resemble human speech.

The leucrocota is the size of an ass, and has the neck, tail and breast of a lion, the haunches of a stag, cloven hooves, a badger's head, and a mouth that opens from ear to ear, with ridges of bone instead of teeth. It is the swiftest of wild animals, and is said to be able to imitate the human voice.