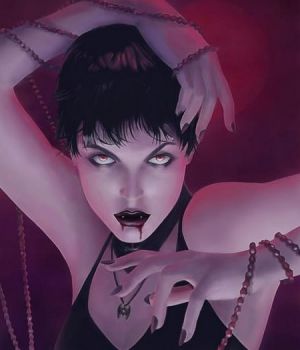 Lhiannan Shee or Lannan Shee is a vampiric spirit of the Isle of Man taking the form of a beautiful woman in order to seduce them and drink their blood.

Corporeal to the beloved, but invisible as for spirit or ghost to anybody else, Lhiannan Shee are mostly non corporeal beings.

Manx version of female Vampire and Succubus (as the lure men through sexual attraction), Lhiannan Shee are also dangerous and evil predators.

On the contrary the Irish Leanan Sidhe is more favourably regarded, as a life giving spirit, the inspiration of poets, but both names mean the fairy sweetheart or fairy mistress, so they are easily confused.

Leanhuan Shee usually settle in a natural environment, they haunt wells and springs.

Like her cousin the Leanan Sidhe of Ireland, but unlike her Irish counterpart, the Lhiannann-Shee seduces men and then drains them of their vitality and spirit, and sometimes quite literally their blood.

Lhiannan Shee of Man are considered both as a Vampire and as a spirits or Ghosts who overcomes the man to whom she appears as an irresistible beauty, though she’s invisible to anyone else. If the yeilds to her seduction, he is ruined body and soul.

Lhiannan Shee, a fairy creatures, fears iron as it might be harmed and killed by it.

This spirit looks for the love of a man. When he refuses she becomes her slave, if they agree they are subdued to slavery and can only run by finding a replacement for the Lhiannan. As she lives on her lover’s lives, the man gets ruined in body and soul.

Because of Gaelic poets, who until recently all had a muse, their Lhiannan, died at a very young age this spirit is considered an evil fairy. As W.B. Yeats states in his book “Fairy and Folk Tales of Ireland) she grew restless and carried them away to other worlds, for death does not destroy her power.

On the other hand W.Y. Evens-Wents, in his book The Fairy Faith in Celtic Countries, reports of a similar tale about a fairy woman mistaken for a succubi, suggesting that at the time (Middle Age) fairies where often mistaken for succubi. He clearly states "… it is not intended by this observation to confuse the higher orders of the Sidhe and all fairy folk such as the fae who come from Avalon with succubi; though succubi and fairy women were often confused and improperly identified the one with the other".