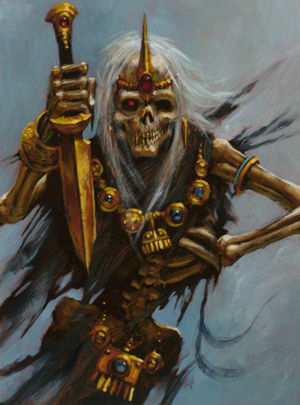 A depiction of a lich.

In modern fantasy fiction, a lich (or liche) is an animated corpse commanded by the spirit of a powerful black magician.

In Roman Catholicism and the Church of England, the word lychgate refers to a covered area at the entrance to the cemetery where the casket awaits the clergy before proceeding into the cemetery for proper burial, lych being a word meaning body or corpse derived from Old English. Cognate to German Leiche (corpse).

Liches are depicted as being clearly cadaverous (as opposed to the generally more appealing forms of vampires), their bodies desiccated or even completely skeletal.

Liches achieve a perverse form of immortality and are usually much stronger as undead than they were when they were alive. Liches are often depicted as holding power over hordes of lesser undead creatures, using them as their soldiers and servants. A necromancer is an evil wizard who practices in the necromancy. Necromancy is the power over the world of the dead. Their powers enable them to raise corpses from the ground to create armies of skeletons and Zombies.

The underlying idea of eluding death by means of arcane study and black magic can be traced to Middle Eastern folklore,and the method of achieving immortality by placing one's soul in a phylactery, usually hidden in some vast fortress, is suggestive of the burial practices of ancient Egypt.

Eastern Slavic mythology includes stories of a powerful dark wizard or a demon, Koschei the Deathless, who evades death by having his fiery soul placed in the eye of a magical needle. The needle is inside an egg, which is inside a duck, which is inside a hare, which is locked in an iron chest placed at the roots of a great oak tree, which is in a hole in the ground on the magical island of Buyan. Koschei can be killed only by breaking the magical needle, which is much like the phylactery of a lich. This image is consistent with the modern interpretation of the lich.

Various works of fantasy fiction, such as Clark Ashton Smith's Empire of the Necromancers, had used lich as a general term for any corpse, animated or inanimate, before the term's specific use in fantasy role-playing games. The more recent use of the term lich for a specific type of undead creature originates from the 1977 Monster Manual for the Advanced Dungeons & Dragons role-playing game by Gary Gygax.

The lich developed from monsters found in earlier classic sword and sorcery fiction, which is filled with powerful sorcerers who use their magic to triumph over death. Many of Clark Ashton Smith's short stories feature powerful wizards whose magic enables them to return from the dead. Several stories by Robert E. Howard, such as the novella Skull-Face and the short story Scarlet Tears, feature undying sorcerers who retain a semblance of life through mystical means, their bodies reduced to shriveled husks with which they manage to maintain inhuman mobility and active thought Thulsa Doom, for example.

Gary Gygax, one of the co-creators of Dungeons & Dragons, has stated that he based the description of a lich included in the game on the short story The Sword of the Sorcerer by Gardner Fox. The term lich, used as an archaic word for corpse (or body), is commonly used in these stories. Other imagery surrounding demiliches, in particular that of a jeweled skull, is drawn from the early Fritz Leiber story Thieves' House.

In the Dungeons & Dragons game (and other works of fantasy fiction that draw upon Dungeons & Dragons for inspiration), a lich is a spellcaster who seeks to defy death by magical means. They are necromancers who are unsatisfied with the level of power that they currently have, wish for longer lives, and seek to unburden themselves from the necessities of bodily functions (such as eating and sleeping) so that they might dedicate every moment of their existence to the attainment of knowledge and power. Liches convert themselves into skeletal undead creatures by means of black magic and necromancy, storing their souls in magical receptacles called phylacteries. With their souls bound to material focuses, they can never truly die. If its body is destroyed, a lich can simply regenerate or find a new one. According to the Dungeons & Dragons mythos, the only way truly to destroy a lich is first to destroy its phylactery, thereby removing its anchor to the material world, and then to destroy its physical form.

Liches are common in many fantasy role-playing games and MMORPGs such as Ultima Online, World of Warcraft, Everquest, Nethack and Guild Wars. In addition, they appear in several other media: