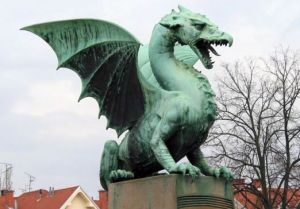 The Ljubljana dragon, the protector dragon of Ljubljana, capital of Slovenia

A long time ago, the Greek hero Jason and his companions from the ship Argo, stole the Golden Fleece from the Colchian king. In an effort to escape its pursuers the ship took a wrong turn and, instead of sailing south on the Aegean Sea, it found its way to the mouth of the Danube river.

As there was no way back for them, they continued on up the Danube, the Sava and eventually the Ljubljanica. At the source of the Ljubljanica they stopped, took the ship apart, put the pieces on their shoulders and thus carried the ship to the Adriatic sea, where they put it back together and continued their way back home.

Between the present-day Vrhnika and Ljubljana the Argonauts found a big lake surrounded by a marsh. It was here that Jason came across a terrible marsh monster, which he fought and eventually slew. This monster was the Ljubljana dragon, which today has its permanent abode on top of the castle tower in the Ljubljana coat of arms.