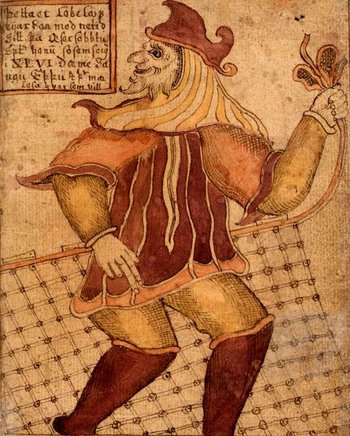 This picture, from an 18th century Icelandic manuscript, shows Loki with his invention - the fishing net.

Loki Laufeyjarson is the god of mischief in Norse mythology, a son of the giants Fárbauti and Laufey, and foster-brother of Odin. He is described as the "contriver of all fraud". He mixed freely with the gods for a long time, even becoming Odin's blood brother. Despite much research, "the figure of Loki remains obscure; there is no trace of a cult, and the name does not appear in place-names".

Like Odin (though to a lesser extent), Loki bears many names : the Sly-One, the Sly-God, the Shape-Changer, the Trickster, the Sky Traveller, the Sky Walker, the Lie-Smith and Loftur among others.

The composer Richard Wagner presented Loki under an invented Germanized name Loge in his opera Das Rheingold--Loge is also mentioned, but does not appear as a character, in Die Walküre and Götterdämmerung.

The trickster god is a complex character, a master of guile and deception. Loki was not so much a figure of unmitigated badness as a kind of celestial con man. He would often bail out the gods after playing tricks on them, as illustrated by the myth in which he shears Sif's hair and then replaces it, or when he is responsible for the loss of Iðunn's apples of youth and then retrieves them again. Loki is an adept shape-shifter, with the ability to change both form (examples include transmogrification to a salmon, horse, bird, flea, etc.) and sex.

According to some scholarly theories Loki is conceived of as a fire spirit, with all the potential for good and ill associated with fire. However, this view is probably due to linguistic confusion with logi "fire", as there is little indication of it in myth where Loki's role is predominantly associated with Odin, either as Odin's wily counterpart or antagonist.

Ström identifies the two gods to the point of calling Loki "a hypostasis of Odin", and Rübekeil suggests that the two gods were originally identical, deriving from Celtic Lugus (the name of which would be continued in Loki). In any case, the figure of Loki was probably not a late invention of the Norse poets but was rather descended from a common Indo-European prototype. 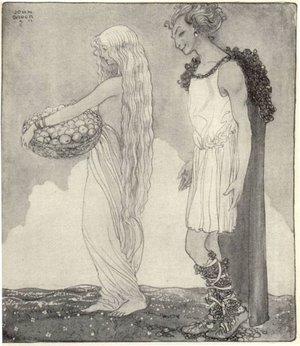 Iðunn and Loki, by John Bauer

Loki was the father (and in one instance the mother) of many beasts, humans and monsters.

Having liaisons with giantesses was nothing unusual for gods in Norse mythology—both Odin and Freyr are good examples; and since Loki was actually a giant himself, there is nothing unusual about this activity. Together with Angrboda, he had three children:

Loki also married a goddess named Sigyn who bore him two sons: Narfi and Vali. (this Vali is not to be confused with Odin's son with the giantess Rind). To punish Loki for his part in Baldur's death the gods turned Vali into a rabid wolf who proceeded to tear Narfi's throat out. Narfi' entrails were used to bind Loki until Ragnarok.

While he was in the form of a mare Loki also gave birth to Sleipnir, the eight-legged steed of Odin.

Loki occasionally works with the other gods. For example, he tricked the unnamed giant who built the walls around Asgard, out of being paid for his work by distracting his horse while disguised as a mare—thereby he became the mother of Odin's eight-legged horse Sleipnir. He also commissioned Odin's spear, Freyr's ship and Sif's wig from Dvalin, the dwarf, as well as rescuing Iðunn. Finally, in Þrymskviða, Loki manages, with Thor at his side, to get Mjolnir back when the giant Thrym secretly steals it, in order to ask for Freyja as a bride, in exchange.

Not all lore depicts Loki as a malevolent being. An 18th century ballad (that may have drawn from a much earlier source) from the Faroe Islands, entitled Loka Táttur, depicts Loki as a friend to man: when a thurs (troll or giant) comes to take a farmer's son away, the farmer and his wife pray to Odin to protect him. Odin hides the son in a field of wheat, but the thurs finds him. Odin rescues the son and takes him back to the farmer and his wife, saying that he is done hiding the son. The couple then prays to Hœnir, who hides the son in the neck-feathers of a swan, but again the thurs finds him. On the third day, they pray to Loki, who hides the son amidst the eggs of a flounder. The thurs finds the flounder, but Loki instructs the boy to run into a boathouse. The giant gets his head caught and Loki kills him by chopping off his leg and inserting a stick and a stone in the leg stump to prevent the thurs from regenerating. He takes the boy home, and the farmer and his wife embrace both of them. 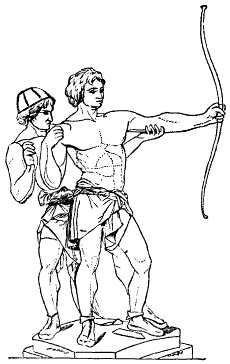 Loki may have overplayed his hand when, disguised as a giantess, he arranged the murder of Baldr. He used mistletoe, the only plant which had not sworn to never harm Baldr, and made a dart of it, which he tricked Baldr's blind brother Höðr into throwing at Baldr, thereby killing him. Another version of the myth, preserved in Gesta Danorum, does not mention Loki.

It is also possibly him who, in the shape of the giantess Thokk, was the only being that refused to weep for Baldr, preventing the defunct god's return from Hel.

The binding of Loki and his fate at Ragnarök

The murder of Baldr was not left unpunished, and eventually the gods tracked down Loki, who was hiding in a pool at the base of Franang's Falls in the shape of a salmon. There they caught the Trickster with his own recent invention, the fishing net. They also hunted down Loki's two children with Sigyn, Narfi and Váli, the son of Odin and Rind). They changed Váli into a wolf, and he then turned against his brother and killed him. They used Narfi's innards to bind Loki to three slabs of stone, and Skaði placed a snake over his head so that its venom would pour onto him. Sigyn, Loki's faithful wife, sits beside him and collects the venom in a wooden bowl, but she has to empty the bowl when it fills up, during which time the searing venom drips onto the Trickster's face. The pain is then so terrible that he writhes, making the earth shake.

Baldr's murder was also one of the events that precipitated Ragnarök. Loki would stay bound until then. When Ragnarök finally comes and Loki is freed by the trembling earth, he will sail to Vigrid from the north on a ship that also bears Hel and all those from her realm. Once on the battlefield, he will meet Heimdall, and neither of the two will survive the encounter.

Some anthropologists have compared him to Coyote and Raven, trickster figures of Native American mythology. Others compare him to Hermes, who tricked Apollo and also often broke boundaries, or to the Slavic god Veles. During the Viking era, some considered him as corresponding to the god of chaos Saturn/Cronus, and called him Saeter. Loki can at times be reminiscent of the Chinese Monkey King whose persona in myth underwent changes over the centuries.