Longinus is the name given in Christian tradition to a Roman soldier who pierced Jesus on his side while he was on the Cross.

Origins of the legend 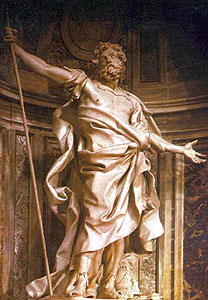 Statue of St. Longinus by Bernini

No name for this soldier is given in the Gospels; the name Longinus comes from a version of the apocryphal Acts of Pilate. The spear used is known as the Spear of Destiny, or Lance of Longinus, and figures in the Holy Grail mythos. In some medieval folklore, e.g. the Golden Legend, the touch of Jesus's blood cures his blindness. Longinus is revered as a martyr in the Eastern Orthodoxy, with anecdotal details introduced to reinforce the duplicity of the Jews in the lore that accumulated around these supposed witnesses to the crucifixion. Longinus does not have an entry in the Catholic Encyclopedia.

A statue of a Saint Longinus is in the Basilica di San Pietro, in the Vatican. It was sculpted by Gian Lorenzo Bernini.

The Longinus legend in popular culture

Part of this article consists of modified text from Wikipedia, and the article is therefore licensed under GFDL.
Retrieved from "https://www.monstropedia.org/index.php?title=Longinus&oldid=10806"
Categories: