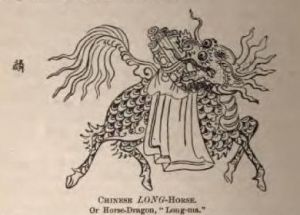 Longma (simplified Chinese: 龙馬; traditional Chinese: 龍馬; pinyin: lóngmǎ; Wade-Giles: lung-ma) was a fabled winged horse with dragon scales in Chinese mythology. Seeing a longma was an omen of a legendary sage-ruler, particularly one of the Three Sovereigns and Five Emperors.

A dragon horse is the vital spirit of Heaven and Earth. As a being its shape consists of a horse's body, yet it has dragon scales. Therefore it is called 'dragon horse'. Its height is eight ch'ih five ts'un. A true dragon horse has wings at its sides and walks upon the water without sinking. If a holy man is on the throne it comes out of the midst of the Ming river, carrying a map on its back. (tr. Visser 1913:58)

A longma revealed the Hetu to Fu Xi or Shun, and the shell of a gui 龜 tortoise revealed the Luoshu to Yu. The Great Treatise commentary to the Yijing explains.

The (10th century CE) Taiping Yulan says a longma that appeared in 741 CE was considered as a good omen for Emperor Xuanzong of Tang.

It was spotted blue and red, and covered with scales. Its mane resembled that of a dragon, and its neighing was like the tone of a flute. It could cover three hundred miles. Its mother was a common horse which had become pregnant by drinking water from a river in which it was bathed. (tr. Visser 1913:59)