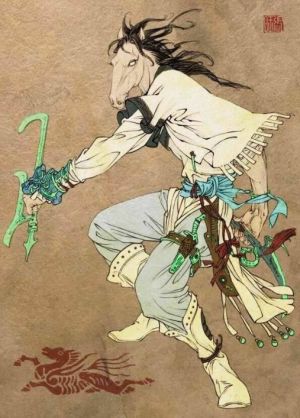 From an unknown region, he a local born; relies on the Ox elder brother, he flaunting in Hades.

Ma-Mian (Horse face) along with Miu-Tou (Ox head) are two fearsome guardians of the Underworld in Chinese mythology.

Ma-Mian has the head of an horse and the body of human.

At first, only existed Ox head existed in Buddhist writings, but when Buddhism spread through China, the folk people preferred things in symmetry. Hence he was then matched with Ma-Mian (Horse face). Other sources still imply that Ma-Mian was also named “Horse Veil Ghost”. In some esoteric sects he had an image of “Ma Mianming the king” This version of him was a major god for some Buddhists - the goddess of mercy's incarnation, which differed greatly from the Hades messenger role typical to him.

They are the first people a dead soul meets upon arriving in the Underworld; in many stories they directly escort the newly dead to the Underworld. Usually, the two are mentioned together.

In the Chinese classic novel Journey to the West, at one point Horse-Face and Ox-Head are sent to capture Sun Wukong, the Monkey King. Sun Wukong overpowers both of them and scares them away. He then breaks into the Underworld and crosses out the names of himself and his people from the record of living souls, hence granting immortality to himself and his monkey followers.