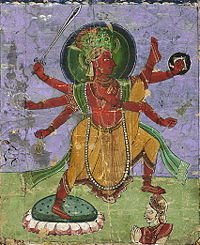 Avatara Vamana splashes Bali’s head, and sends him to the Patala

Mahabali (Sanskrit: Mahābalī, Devanagari: महाबली), also known as Māveli, was a benevolent Asura King and the grandson of Prahlada.

Bali was from the line of Diti, a deity in the Rigveda and his real name is Indrasena. He was born of Devamba to Veerochana, the son of Prahlada. He grew up under the tutelage of his grandfather who instilled in him a sense of righteousness and Bhakti. Bali succeeded his grandfather to become king of the Asuras. There was peace and prosperity everywhere during his reign. He expanded his kingdom and usurped the heaven.

The vanquished Devas then complained to their protector Vishnu, who assured them that he himself would restore the authority of Devas. Bali, at the behest of his Guru Sukracharya decided to conduct the Ashwamedha Yagam. During the Yagam, Vishnu, in the guise of a small Brahmin boy (Vamana), appeared before Bali and asked for three paces of land. Bali, who had vowed not to refuse anyone, promptly granted the wish, even ignoring the warnings of his guru. Vishnu in the guise of Vamana then increased his stature and with the first step covered the sky, blotting out the stars, and with the second, straddled the netherworld.

Realising that Vamana's third step will destroy the earth, Mahabali offered his head as the last step and was thus banished to the Patala. However, impressed by Bali's unselfish devotion and unwavering "dharma", Vishnu granted him the permission to visit his subjects once every year. Onam is the celebration that marks the homecoming of King Mahabali. It is the day when a grateful Kerala pays a glorious tribute to the memory of this benign king who gave his all for his subjects.

Another legend has it that King Mahabali was a devout worshipper of Lord Vishnu. He was sincere, honest, just and a good ruler. But he had one weakness — ego. And to eradicate his pride and redeem his beloved devotee of this one sin, Vishnu came to earth in the form of a dwarf Brahmin named Vamana.

The king in his pride asked the Brahmin what he wanted for he could give anything. Vamana asked for three paces of land and the king agreed. To humble him Vishnu, as Vamana showed Mahabali that he is just a puny creature in front of God's universal stature.

Mahabali, who was a man of principles, realized God's purpose and offered his head for Vamana's footstep, as he was sent to another world. This fatal step proved a blessing in disguise for the good king — the foot salvaged and released him from the recurrent cycle of birth and death. That is why Onam is celebrated by wearing new clothes and resolving to lead a new life of truth, piety, love, and humility.