Anonymous
×
Revision as of 20:14, 16 January 2010 by Admin (talk | contribs) (New page: thumb|Mask of the wolf-headed Mahasohona, the Great Cemetery Devil '''Mahasohona''' is a famous demon of Sri Lanka who is claimed to use a black dog as vehicle. ...)
(diff) ← Older revision | Latest revision (diff) | Newer revision → (diff) 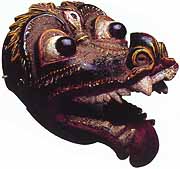 Mask of the wolf-headed Mahasohona, the Great Cemetery Devil

Mahasohona is a famous demon of Sri Lanka who is claimed to use a black dog as vehicle.

In the village of Hundarivapi there lived a man named Tissa, who had eight sons. The youngest was named Sona and later became known as Maha Sona. It is said that when Mahasona was seven years old, he had the strength to tear young palms with his bear hands. When he was ten, he could uproot palm trees.

The King of Rohana, Khavantissa, who was looking for brave young men for his army, heard of the this young boy's strength and sent his men with gifts to his parents, requesting them to send their son to the royal court. After seeing him, the King enlisted him into the service of Prince Gemunu (Circa B.C. 100) who was building up his army.

Mahasona became a great warrior and a famous hunter. However, he lost a duel against an adversary that decapitated him and he was buried with the head of a bear. This is how originated the Mahasona apparition.