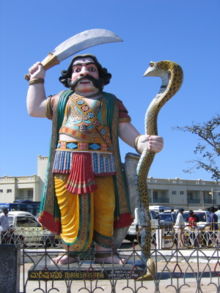 A statue of Mahishasura in Chamundi Hills, Mysore.

Mahishaasura is a notorious asura (demon) that features prominently in Hindu mythology. The nine day long Mahisha Mardini vigil maintained by worshippers of the goddess Durga celebrates his destruction at the hands of this divinity.

It is a combination of two Sanskrit words. The first component Mahisha is a term used to denote a buffalo ,while the second part Asura refers to a race of supernatural beings in Hindu mythology that continuously strive to undermine the divine order established by the gods as related by numerous accounts from Hindu mythology. Hence, his name reflects his dual nature as both an asura and a buffalo.

The ancient Hindu scripture known as the Devi Mahatmyram celebrates and describes the victory of the goddess Durga over the demon Mahishasura. Although its primary focus is on the goddess and the three main manifestations that she undergoes in order to put an end to a quartet of vicious asuras, among whom Mahisasura numbers, this text also describes to some degree the origins and story of the asura by that name. Mahishasura was the offspring of the asura Rhamba.

In order to win the favour of the fire god Agni, Rhamba decided to subject himself to a severe penance to demonstrate his devotion to Agni and thus chose to hurl himself into a raging fire. Pleased by the asura's courage, Agni duly appeared before Rhamba and asked the asura if he wished a boon of the fire god. Rhamba accepted this offer and requested that Agni bestow on him a son that would someday dominate the world. Agni promised him that such a son would result from the first intimate union that he had with a female. Elated, Rhamba chose to return to his home. During this return journey however, he encountered a female buffalo and found himself sexually attracted to the beast.

Alternatively, the animal he encountered has also been described as being a female demon in the guise of a buffalo. Regardless of the animal’s true nature, Rhamba took the she buffalo as a consort. However, shortly following their union, a male buffalo made sexual advances towards Rhamba’s spouse. In attempting to defend his spouse from this interloper, Rhamba was gored by the male buffalo. Stricken by grief, the she buffalo chose to go to her death on the funeral pyre prepared for her husband. Before that took place however, Agni’s boon manifested itself as she delivered a male infant. Subsequently raised by Rhamba’s relatives, the boy was raised to become the king of the asuras.

In due course, the boy who was none other than Mahishasura, became an ardent devotee of the creator deity Brahma. Determined to obtain a boon from Brahma, he performed severe penances in order to win that deity’s favour. After Brahma appeared before Mahishasura, the demon requested that he be given a boon that would prevent him from ever being slain by a male. Not seeing women as a threat that might ever imperil his life, he was confident that such a boon would effectively grant him invincibility. Once he had been granted this boon of seeming invincibility, he proceeded to invade both heaven (Swarga Loga) and earth (Prithvi), driving out Indra the king of the devas or minor gods in the process. Terrified by the power of this asura, the devas sought the aid of the trinity of the supreme gods, namely Shiva, Vishnu and Brahma.

Returning with the divine trinity in tow, the devas launched a renewed assault on Mahishasura. Once again, they suffered defeat as Mahishasura succeeded in putting both Shiva and Vishnu to flight. After experiencing such a humiliating defeat, the three supreme deities realised that they were powerless to stop Mahishasura by themselves and decided to pool their energy instead to create a being capable of destroying him. From the comingled power of Shiva, Vishnu and Brahma, emerged the goddess Durga. After being armed by both this supreme trinity and a host of other lesser gods with an array of weapons and implements, and being given a lion as a mount by them, she set off at the head of a large army in the direction of Mahishasura’s stronghold to do battle with him. At her approach, the asuras initially felt themselves dazzled by her beauty, so much so that when word of Durga’s beauty reached Mahisahasura, he despatched his envoys to ask for her hand in marriage on his behalf.

However, this besotted admiration on their part soon rapidly vanished as Durga not only rejected the marriage proposal, but even begun to initiate a furious battle with them. In due course, the armies of both Chikasuar and Chamra, the two commanding generals of Mahishasura’s forces, were utterly destroyed by Durga. At last, Mahishasura alone was left to face Durga in battle. Although initially hesitant to face her in combat due to the fact that his boon would not protect him from a female entity of such a destructive nature, his ego at last got the better of him as Durga taunted his pride by challenging him to emerge from his palace and battle with her. Resolved to personally put an end to her by now, Mahishasura emerged on the battle field in his natural form as a monstrous buffalo.

Charging with his massive horns and dealing vicious whip-like lashes from his tail, he sowed terror among the ranks of Durga’s warriors. Eventually however, his rampage came to an end as Durga’s lion became enraged with the berserk bovine in the midst of its master’s army and proceed to attack it. After a furious struggle, Durga was able to ensnare Mahishasura’s head with a noose, allowing her to get him into a position for her killing strike. In a desperate effort to save his life, the furious asura took on the appearance of a raging lion and then an elephant which hurled trees and mountains at the goddess, before finally reverting back to his true form as a buffalo. As he was midway between transforming himself from a buffalo into a human, Durga stabbed the asura in his chest with her trident, slaying him.