The Makara is a fabulous beast in Hindu mythology close to the water horse with the body of a fish and the head of an elephant or crocodile. 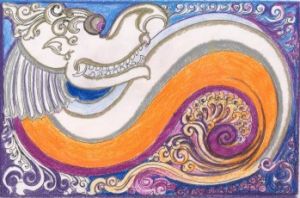 The Makara has the scales of a fish, the tail of a peacock, the trunk of an elephant, the eyes of a monkey, the jaws and nose of a crocodile and the tusks of a boar.

In astrology, the makara is often translated Water Horse, and corresponds to the western astrological sign of Capricorn. It is serpentine or seal-like, and its elephantine head is often used as an architectural decoration or as a structural bracket.

The Sanskrit word makara refer to the amphibian animal we know as the crocodile.

Makara is linked to other mysterious water creatures such as the Kelpie, the Silkie and the Seahorse because of certain common characteristics.

In India, Makara-Shankranti occurs at the terminal cusp of Capricorn indicating that the sun is now entering the tenth house of the Zodiac and heading towards the northern hemisphere -- the winter solstice has passed. It is celebrated in the middle of the month of January and is regarded as a kind of New Year. Unfortunately, it is the custom for many Hindu families to sacrifice animals at this time, often one for each member. In the state of Kerala, a holy flame called Makara Jyoti seems to appear in the skies at the prominent temple of Sabari Malai on that day.

Varuna is the vehicle of Varuna god of winds, and also of the river deity, Ganga. As builder of the cosmic order, Varuna is also guardian of the Final Gate and the makara symbolizes chaos out of which order emerges and to which it returns. The Bhagavad Gita says that "the makara among the fish is like the Ganges among the rivers; like Rama among the warriors."

Makaras are associated with Indian goddess Ganga, but they are also connected with Laxmi, who is linked with good fortune.

Makara and elephant are linked in a Indian (Hindu) tale in the Bhagvata Purana:

Once Gajendera, king of the elephants, was bathing with his herd. It was the king's custom to remain on guard while the rest made their way to shore, but this evening a crocodile, disturbed by the activity, grabbed one of Gajendera's legs and began to drag him under the water. The chief pachyderm, strong and experienced as he was, was unable to extricate himself from the vice-like jaws. In fear and agony, he called for help from the others, but even their combined effort was futile. Slowly and methodically the reptile dragged him under until his trunk could barely reach for air. Exhausted and defeated, the others gave up any hope of rescuing their leader. In desperation, Gajendera appealed to Lord Vishnu, who hearing the cry of His devotee, rushed to his aid on his vehicle, Garuda, and with a toss of his discus beheaded the crocodile.

A magar played a crucial role in the legend of Hindu philosopher Shankara (ca. 700 CE):

One day, while still a child, he was bathing in the Purna river when a crocodile caught one of his feet. The boy’s screams brought his mother running in a panic to the riverbank. Shankara called out that he knew his life would be spared if only she would agree to let him become a sunyasin (renunciate.) So, fearing for her son’s life, she consented despite the fact that she had hoped he would marry and have a family. Then Shankara uttered a mantra and the crocodile promptly let go. It was not long afterward that he left home in search of his guru, entrusting his mother to the care of relatives. He promised his mother that he would certainly be there to perform the rites at the time of her passing away.

Despite the fact that Shankara was an opponent in philosophical debates with the Buddhists of his time, the symbolism of this legendary event may have had some influence. For in the practice of yogic or tantric Buddhism, the head of a makara appears on the handle of ritual implements such as the dorje and the tigu, although it is often explained in other ways.

If ever there actually existed an animal resembling the makara as depicted beside the gates of mediaeval Indian temples then the gentle, vegetarian hippopotamus (Trichechus manatus) might even be a candidate.