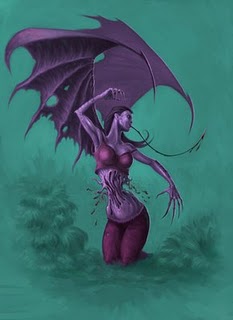 A manananggal in Filipino folklore or penanggalan in Malay folklore consists of a woman's torso that has wings attached. The woman splits her torso from her body at night, sprouting wings and a long tongue. The Penanggalan is a creature like the Manananggal, except her head flies off with her entrails hanging below it.

Manananggals are sometimes referred to as tik-tik or "wak wak". The sound it is supposed to be making while flying. The fainter the sound the nearer it is. This is to confuse the victim. The tik-tik eats a child in the mothers womb causing the body or face of the child to be disformed.

The name of the creature originates from an expression used for a severed torso: Manananggal comes from the Tagalog, tanggal (cognate of Malay and Indonesian tanggal) which means to sever. Manananggal then means the one who severs.

In Malaysian folklore, Manananggal is referred to as Penanggal or Penanggalan which literally means "detach", "to detach", "remove" or "to remove". Both terms - Manananggal and Penanggal - may carry the same meaning due to both languages being grouped or having a common root under the Austronesian language family.

The myth of the Manananggal is popular in the Visayan region of the Philippines, especially in the western provinces of Capiz, Iloilo, Antique. Folklore of similar creatures can be found in the neighbouring nations of Indonesia and the Malay Peninsula, or Balan-balan in Sabah.

It resembles a Western vampire, in being an evil, human-devouring monster or witch. The myth of the manananggal is popular in the Visayan region of the Philippines, especially in the western provinces of Capiz, Iloilo, Antique. There are varying accounts of the features of a manananggal. Like vampires, Visayan folklore creatures, and aswangs, manananggals are also said to abhor garlic and salt. They were also known to avoid daggers, light, vinegar, spices and the tail of a sting ray which can be fashioned as a whip. Folklore of similar creatures can be found in the neighbouring nations of Indonesia and Malaysia.

The Manananggal cannot be readily classified as a classical undead being or a vampire as per Western folklore or literature since the creature is, for all intent and purposes, a living human being during daytime or at any time when it does not detach itself from its body.

A manananggal is described as being an older, beautiful woman, capable of severing its upper torso using black magic in order to fly into the night with huge bat-like wings to prey on unsuspecting pregnant women in their homes; using an elongated proboscis-like tongue, it sucks the hearts of fetuses or blood of an unsuspecting, sleeping victim.

A notable difference between a Penanggal and Manananggal is that a Penanggal detaches only her head with her lungs, stomach and intestines attached to it while leaving the body in a pre-prepared container filled with vinegar to preserve the body against rapid decomposition. Additionally, unlike the Manananggal which uses a proboscis-like tongue, a Penanggal is also commonly depicted as having fangs. The number of fangs varies from one variation of the folklore to another ranging from two which is common to vampirekind in folklore to a mouthful of fangs. 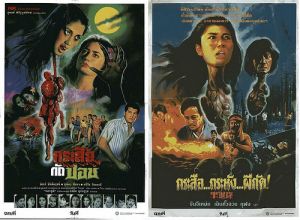 One variation of the folklore claims that a Penanggal is able to pass through walls. Other, perhaps more chilling, descriptions say that the Penanggal can ooze up through the cracks in the floorboards of a house, rising up into the room where an infant or woman is sleeping. Sometimes they are depicted as able to move their intestines like tentacles.

Superstitious folk in the Vizayan provinces still hang cloves of garlic or onion around windows, doors, etc. with the purpose of repelling this creature as well as the aswang. Similar folklore can be found in the neighbouring Malaysia although with notable differences noted below. In households, where a newborn is expected, branches from the thistle, jeruju, are hung about the doors and windows. The theory is, the Penanggalan's entrails will become ensnared in the thorns, and she will be held there until morning, when she is vulnerable to dispatch.

The Penanggalan seems to have full control over her organs, using them as an octopus manipulates its tentacles, yet this fact is often overlooked in descriptions. The Penanggalan would use her entrails (primarily her small intestine, because of their length) to perform a variety of common mechanics, as well as using them to constrict her prey.

The most common remedy prescribed in Malaysian folklore to protect against a Penanggal attack is to scatter the thorny leaves of a local plant known as Mengkuang which would either trap or injure the exposed lungs, stomach or intestines of the Penanggal as it flies in search of its prey.

A prescribed method of permanently killing a Penanggal requires for it to be carefully followed and tracked back to its lair (which is always well hidden), the person or creature to be positively identified and the act of destroying it is carried out the next time the Penanggal detaches itself from its body. Once the Penanggal leaves its body and is safely away, it may be permanently destroyed by either pouring pieces of broken glass into the empty neck cavity which will sever the internal organs of the Penanggal when it reattaches to the body or by sanctifying the body and then destroying the body by cremating it or by denying the Penanggal from reattaching to its body upon sunrise. Sprinkling salt, smearing crushed garlic or ash on top of the standing torso would also be fatal.

According to another tradition, Penanggalan's entrail discharge, in addition to being caustic or disease carrying, spoils the earth where it drops in quantity, causing the growth of a hideous thorny plant, that spreads like a weed. The plant is sometimes described as possessing colorful bioluminescence in its leaves, which glow brighter when the wind blows. Tracking down of the Penanggalan's lair is simplified by the tell-tale presence of the Penanggalan briar.

The origin, or transformation, from a normal woman to the Penanggalan also differs somewhat from tale to tale. The most common and widely accepted is this: a woman, while seated in a large wooden vat, used for holding vinegar distilled from the sap of the thatch palm (menyadap nipah) performing a religious penance (dudok bertrapa), is interrupted by a man who asks what she is doing. She is so utterly startled that she jumps up, her head literally popping off of her body. The severed head, along with the entrails, which follow it through the neck opening, flies up into a nearby tree, shrieking. Ever since then, she existed as the Penanggalan, an evil spirit that has a certain weakness for newborn blood.

Herbert Bautista plays a teenager in a faraway province in an episode of this horror anthology movie series. A manananggal is said to live within the vicinity and is out to eat people. He is given the task by his grandmother to kill this creature. Having found a way to prevent it from returning to its body, he must now survive the night to protect his family from the creature's attacks. This story is one of the most popular and suspenseful episodes of the entire series.

A homeless family and their neighbors in the city of Manila are plagued by attacks from a manananggal. A little boy suspects a nun (Aiko Melendez) to be that creature but no one believes him. He finds himself racing to prove his suspicions before he becomes the monster's next victim.

Part of this article consists of modified text from Wikipedia, and the article is therefore licensed under GFDL.
Retrieved from "https://www.monstropedia.org/index.php?title=Manananggal&oldid=15066"
Categories: