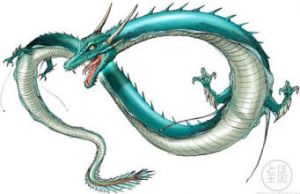 Manda (マンダ) is a kaiju similar to a Chinese dragon that first appeared in the Toho film Astragon.

Manda is a serpentine creature with four small legs and prominent horns.

Manda does not have any special weapons, but he can wrap his body around an enemy and crush them similar to how a snake constricts his prey. Manda can also swim very fast and can breathe while submerged in water.

Manda was a dragon that lived in the sea and was the guardian of Mu, an underwater kingdom. When the warship Gotengo attacked, Manda fought it and wrapped its body around the ship, trying to crush it. But the Gotengo discharged electricity on Manda and shocked it. Manda unwrapped itself and tried to swim away. The Gotengo chased after and fired its freeze ray and froze Manda.

Manda wasn't frozen forever, however, as he reappeared in 1999 on Monster Island along with several other kaiju, including Godzilla, Rodan and Anguirus in Destroy All Monsters. Soon that day, aliens called Kilaaks came to Earth and took control of Manda and the other monsters and made them attack cities in the world until the humans freed the monsters from the alien mind control. Then the monsters were sent to fight King Ghidorah, though Manda did not fight in the battle and watched from the sidelines with Varan and Baragon. After Ghidorah was killed, Manda and the other monsters returned to Monsterland.

In the Millennium series, Manda is the first monster to be killed in Godzilla: Final Wars, playing a minor role as an adversary of the Gotengo. Manda attacks Normandy, when the Gotengo comes to stop it and attacks Manda. At first, Manda was able to constrict himelf around the Gotengo and pull the warship further and further into the depths of the water, severely damaging it. However, the crew spotted an underwater volcano and charged into it, with Manda stuck on their ship. Not withstanding the heat, Manda managed to unwrapped himself and swam away. As the Gotengo got out of the volcano, Manda charged. However, the Gotengo turned around and fired the maser cannon to freeze the weakened Manda, and then rammed into him with its powerful drill, breaking it into pieces.