The manticore, considered to be the most dangerous predator in Asia, has the body of a lion and a head with human. The beast is also known as the "manticora", the "mantichor", for short "manty" or by a folk etymology, even the "mantiger". 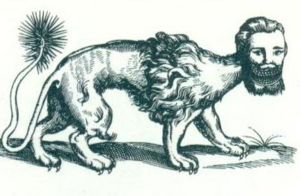 Manticore means "the Eater of People" from early Middle Persian martya "human, mortal being" and xwar- "to eat". The English term "manticore" was borrowed from Latin mantichora, itself borrowed from Greek mantikhoras - an erroneous pronunciation of the original Persian name.

Physically, the manticore was know as having the body of a red lion, the face and ears of a blue eyes human and a tail ending in a sting like that of a scorpion. The mouth contains three rows of razor-sharp teeth and poisoned spines along the tail could be shot, like arrows in any direction. The manticore was also attributed with having a voice that was the mixture of pipes and a trumpet. The beast is very swift and makes very powerful leaps. Occasionally, a manticore will possess wings of some description. Size reports range from lion-sized up to horse-sized.

The monster stalks through the forest in search of humans. Upon an encounter with a human, the manticore fires darts at the victim, who dies immediately. This unfortunate person is eaten completely, even the bones and clothing, as well as the possessions this person carried, vanish. When a villager has completely disappeared, this is considered proof of the presence of a manticore. Some later traditions added that it would often challenge its prey with riddles before killing but it is untrue.

The manticore is reputed to roam in the jungles of India and Indonesia, and is known to have an appetite for humans.

The earliest accounts seem to be from Persian legend. The name itself is from the Old Persian martikhoras meaning 'man-eater'. It passed into European mythology first through a remark by Ctesias, a Greek physician at the Persian court of King Artaxerxes II in the fourth century BCE, in his notes on India ("Indika"), which circulated among Greek writers on natural history, but have not survived.

Pausanias, in his Description of Greece, recalled strange animals he had seen at Rome and commented,

The beast described by Ctesias in his Indian history, which he says is called martichoras by the Indians and "man-eater" by the Greeks, I am inclined to think is the lion. But that it has three rows of teeth along each jaw and spikes at the tip of its tail with which it defends itself at close quarters, while it hurls them like an archer's arrows at more distant enemies; all this is, I think, a false story that the Indians pass on from one to another owing to their excessive dread of the beast. (Description, xxi, 5)

Pliny the Elder did not share Pausanias' skepticism. He followed Aristotle's natural history by including the martichoras — mistranscribed as manticorus in his copy of Aristotle and thus passing into European languages — among his descriptions of animals in Naturalis Historia, c. 77 CE.

Pliny's book was widely enjoyed and uncritically believed through the European Middle Ages, during which the manticore was sometimes illustrated in bestiaries.

A thirteenth century romance about Alexander the Great called Kyng Alisaunder, says that he lost 30 000 men to such beasts as adders, lions, bears, dragons, unicorns, and manticeros. However, as early as the second century A.D., writers thought that the manticore was nothing more than a man-eating Indian tiger. The physical embellishments, either indicative of the fears the people had for the beast or anecdotal exaggeration or misinterpretations of Indian sculptures.

The manticore made a late appearance in heraldry, during the 16th century, and it influenced some Mannerist representations — sometimes in paintings but more often in the decorative schemes called 'grotteschi' — of the sin of Fraud, conceived as a monstrous chimera with a beautiful woman's face, and in this way it passed into the 17th and 18th century French conception of a sphinx.

In the middle ages, the manticore was the emblem for the prophet Jeremhia because the manticore lives in the depths of the earth and Jeremiah had been thrown into a dung pit. At the same time, the manticore became the symbol of tyranny, disparagement and envy, and ultimately the embodiment of evil. As late as the 1930s it was still considered by the peasants of Spain, to be a beast of ill omen. Outside occultist circles, the manticore was still an arcane creature in the Western world when Gian Carlo Menotti wrote his ballet The Unicorn, the Gorgon, and the Manticore in 1956.

"Thre huge grete teeth in his throte...the voys of a serpente in suche wyse that by his swete songe he draweth to hym the peple and deuoureth them."

"If we may believe Ctesias...he mentions an Indian animal called Martichora, which had three rows of teeth in each jaw; it is as large and rough as a lion, and has similar feet, but its ears and face are like those of a man; its eye is grey, and its body red; it has a tail like a land scorpion, in which there is a sting; it darts forth the spines with which it is covered, instead of hair, and it utters a noise resembling the united sound of a pipe and a trumpet; it is not less swift of foot than a stag, and is wild, and devours men."

"A triple row of teeth meeting like the teeth of a comb, the face and ears of a human being, grey eyes, a blood-red color, a lion's body, inflicting stings with its tail like a scorpion...with a special appetite for human flesh."

"When the Indians take a Whelp of this beast, they fall to and bruise the buttockes and taile thereof, so that it may never be fit to bring sharp quills, afterwards it is tamed without peril. This, also, is the same beast which is called Leucrocuta, about the bigness of a wilde Asse, being in legs and hoofes like a Hart, having his mouth reaching on both sides to his eares, and the head and face of a female like unto a Badgers."

Like many other legendary creatures, the manticore is a popular monster and allegory in fiction: