The mapinguary (also spelled "mapinguari") is a giant slothlike monster reported from the Amazon Rainforest of South America (Argentina, Brazil and Bolivia). 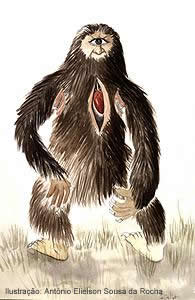 Illustration of a full-featured mapinguary

According to local tales and legends, the creature is a tall black or red-furred hominid over 2 meters (7 feet) tall, covered in thick, matted fur, that makes it all but impervious to bullets and arrows, long arms ending in sharp claws, an oval-shaped head, and an enormous mouth with menacing fangs. In some areas, the creature is said to have two eyes, while in other accounts it has only one, like the Cyclops of Greek mythology. Some tell of a gaping, stinking mouth in the monster’s belly through which it consumes humans unfortunate enough to cross its path. But all accounts agree that the creature emits a strong, extremely disagreeable odor, and that it has because of this despicable odor, the creatures are often followed by clouds of flies, and the strongest warriors are forced to flee from the smell of the monster alone; others find themselves dazed and sick for days after an encounter.

The monster is said to be strong enough to twists off the upper skulls of its human victims so as to suck up their gray matter.

Unlike its counterparts in the Northern Hemisphere, the creature is said not to flee human contact, but to aggressively hunt down the hunter, turning the tables on those who do not respect the jungle’s unwritten rules and limits.

“The only way you can kill a mapinguary is by shooting at its head,” said Domingos Parintintin, a tribal leader in Amazonas State. “But that is hard to do because it has the power to make you dizzy and turn day into night. So the best thing to do if you see one is climb a tree and hide.” “Often, the mapinguary gets revenge on people who transgress, who go where they shouldn’t go or harvest more animals or plants than they can consume, or set cruel traps,” said Márcio Souza, a prominent Brazilian novelist and playwright who lives in Manaus, in the central Amazon, and often draws on Amazon history and folklore in his works.

Usually seen in the jungles along the 'Rio Araguaia', a large river in Brazil's state of Mato Grosso do Sul.

In March and April of 1937 one of these creatures supposedly went on a three week rampage. Over one hundred heads of yellow cattle of old Spanish origin were killed, all the way to Ponta Branca, located 150 miles south of Barra das Garaas. Reports included unconfirmed sightings, humanoid-like tracks as long as 18 inches, and horrible roaring from the woods. This Mapinguary rampage made the major newspapers in Rio de Janeiro and Sao Paulo. Other sightings have been reported lately in Argentina, Peru and Patagonia.