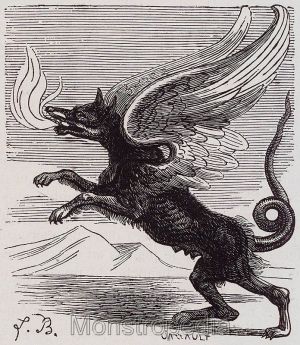 In demonology, Marchosias is a powerful Great Marquis of Hell.

Marchosias is a powerful Great Marquis of Hell commanding thirty legions of demons.

Marchosias is depicted as a wolf, a she-wolf with griffin wings and a serpent's tail that spit flames, or an ox, and under request it changes shape into a man. One of his favourite form then is a grand soldier.

Marchosias obeys exorcists and the domination of angels. He is a strong and excellent fighter and very reliable to the conjurer, giving true answers to all questions. Marchosias hoped after one thousand and two hundred years to return to heaven with the non-fallen angels, but he is deceived in that hope.

Marchosias is a great marquesse, he sheweth himselfe in the shape of a cruell shee woolfe, with a griphens wings, with a serpents taile, and spetting I cannot tell what out of his mouth. When he is in a mans shape, he is an excellent fighter, he answereth all questions trulie, he is faithfull in all the conjurors businesse, he was of the order of dominations, under him are thirtie legions: he hopeth after 1200 yeares to returne to the seventh throne, but he is deceived in that hope. - Pseudomonarchia daemonum - Johann Wier (1583)

The Thirty-fifth Spirit is Marchosias. He is a Great and Mighty Marquis, appearing at first in the Form of a Wolf18 having Gryphon's Wings, and a Serpent's Tail, and Vomiting Fire out of his mouth. But after a time, at the command of the Exorcist he putteth on the Shape of a Man. And he is a strong fighter. He was of the Order of Dominations. He governeth 30 Legions of Spirits. He told his Chief, who was Solomon, that after 1,200 years he had hopes to return unto the Seventh Throne. And his Seal is this, to be made and worn as a Lamen, etc. - Goetia - S. L. MacGregor Mathers (1904)