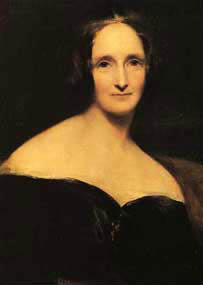 Mary Shelley (30 August, 1797 – 1 February, 1851) was an English novelist, the author of Frankenstein. She was married to the notable Romantic poet Percy Bysshe Shelley.

Mary Shelley was born Mary Wollstonecraft Godwin in London, England, the second daughter of famed feminist, educator and writer Mary Wollstonecraft and the equally famous anarchist philosopher, anarchic journalist and atheist dissenter, William Godwin. Her mother died ten days after her birth and her father, left to care for Mary and her older half-sister, Fanny Imlay, quickly married again. Mary received an excellent education, unusual for girls at the time. However, it must be noted here that Mary did not receive any "formal" education, but she was rather homeschooled under tutelage of her father. She met Percy Bysshe Shelley, a political radical and free-thinker like her father, when Percy and his first wife Harriet visited Godwin's home and bookshop in London. Percy, unhappy in his marriage, began to visit Godwin more frequently (and alone). In the summer of 1814 he and Mary (then only 16) fell in love. They eloped, (though Percy was still married to Harriet at the time) to France on 27 July, with Mary's stepsister, Jane Clairmont, in tow. This was the poet's second elopement, as he had also eloped with Harriet three years before. Upon their return several weeks later, the young couple were dismayed to find that Godwin, whose views on free love apparently did not apply to his daughter, refused to see them. He did not talk to Mary for two years.

Mary consoled herself with her studies and with Percy, who would always be, despite disillusionment and tragedy, the love of her life. Percy, too, was more than satisfied with his new partner in these first years. He exulted that Mary was "one who can feel poetry and understand philosophy" — although she, like Harriet before her, refused his attempts to share her with his friend Thomas Hogg. Mary thus learned that Percy's loyalty to Godwin's free love ideals would always conflict with his deep desire for "true love" as expressed in so much of his poetry.

Mary and Percy shared a love of languages and literature. They enjoyed reading and discussing books together, such as the classics that Percy took to reading upon their return to London towards the end of the year. During this time Percy Shelley wrote "Alastor, or The Spirit of Solitude", in which he counsels against the loss of "sweet human love" in exchange for the activism that he himself was to promote and indulge in for much of his life.

During May of 1816, the couple, again with Jane (now Claire) Clairmont, traveled to Lake Geneva to summer near the famous and scandalous poet Lord Byron, whose recent affair with Claire had left her both pregnant and somewhat obsessed with him. In terms of English literature, it was to be a productive summer. Percy began work on "Hymn To Intellectual Beauty" and "Mont Blanc". Mary, in the meantime, was inspired to write an enduring masterpiece of her own.

Forced to stay indoors by the climatic events of the "Year Without a Summer" on one particular evening, the group of young writers and intellectuals, enthralled by the ghost stories from the book 'Fantasmagoriana', decided to have a ghost-story writing contest. Another guest, Dr. John Polidori, came up with The Vampyre, later to become a strong influence on Bram Stoker's Dracula.

Other guests wove tales of equal horror, but Mary found herself unable to invent one. That night, however, she had a waking dream where she saw "the pale student of unhallowed arts kneeling beside the thing he had put together." Then she set herself to put the story on paper. In time it would be published as Frankenstein. Its success would endure long after the other writings produced that summer had faded.

Mary had incorporated a number of different sources into her work, not the least of which was the Promethean myth from Ovid. The influence of John Milton's Paradise Lost, And Samuel Taylor Coleridge's The Rime of the Ancient Mariner, the book the creature finds in the cabin, is also clearly evident within the novel. Also, both Shelleys had read William Beckford's Vathek (a Gothic novel that has been likened to an Arabesque). Frankenstein is also full of references to her mother, Mary Wollstonecraft, and her major work A Vindication of the Rights of Woman which discusses the lack of equal education for males and females. The inclusion of her mother's ideas in her work is also related to the theme of creation/motherhood in the novel.

Can one miss the darkling reflection of the Beckford character's "insolent desire to "penetrate the secrets of heaven" in both "Alastor" ("I have made my bed In charnels and on coffins") and Mary's acclaimed piece ("Who shall perceive the horrors ...as I dabbled among the unhallowed damp of the grave, or tortured the living animal to animate the lifeless clay")? Indeed, many, if not most, commentators take this "desire" to be a major theme of Frankenstein.

Mary and Percy were both ethical vegetarians and strong advocates for animals. One can see references to vegetarianism in her writing. For example, in her novel Frankenstein, the creature was a vegetarian.

Returning to England in September of 1816, Mary and Percy were stunned by two family suicides in quick succession. On 9 October 1816, Mary's older half-sister, Fanny Imlay, left the Godwin home and took her own life at a distant inn. On 10 December, Percy's first wife drowned herself in London's Hyde Park. Discarded and pregnant, she had not welcomed Percy's invitation to join Mary and himself in their new household.

On 30 December 1816, shortly after Harriet's death, Percy and Mary were married, now with Godwin's blessing. Their attempts to gain custody of Percy's two children by Harriet failed, but their writing careers enjoyed more success when, in the spring of 1817, Mary finished Frankenstein.

Over the following years, Mary's household grew to include her own children by Percy, occasional friends, and Claire's daughter by Byron. Shelley moved his menage from place to place first in England and then in Italy. Mary suffered the death of her infant daughter Clara outside Venice, after which her young son Will died too, in Rome, as Percy moved the household yet again. By now Mary had resigned herself to her husband's self-centered restlessness and his romantic enthusiasms for other women. The birth of her only surviving child, Percy Florence Shelley, consoled her somewhat for her losses.

Eventually the group settled in Pisa. For the summer of 1822 they moved to Lerici, a fishing village close to La Spezia in Italy, but it was an ill-fated choice. It was here that Claire learned of her daughter's death at the Italian convent to which Byron had sent her, and that Mary almost died of a miscarriage, being saved only by Percy's quick thinking. And it was from here, in July 1822, that Percy sailed away up the coast to Livorno, to meet Leigh Hunt, who had just arrived from England. Caught in a storm on his return, he drowned at sea on 8 July 1822, aged 29, along with his friend Edward Williams and a young boat attendant. Percy left his last long poem, a shadowy work called The Triumph Of Life, unfinished.

Mary was tireless in promoting her late husband's work, including editing and annotating unpublished material. Despite their troubled later life together, she revered her late husband's memory and helped build his reputation as one of the major poets of the English Romantic period. But she also found occasions to write a few more novels, including Valperga: The Life and Adventures of Castruccio, Prince of Lucca; The Fortunes of Perkin Warbeck, Lodore, and Falkner. Critics say these works do not begin to approach the power and fame of Frankenstein; The Last Man, a pioneering science fiction novel of the human apocalypse in the distant future, is, however, sometimes considered her best work, as is Mathilda, a novella published posthumously. Mathilda is a short novel which was not published until the 1950's. It is perhaps her most controversial work since it involves the taboo subject of incest. Godwin, Shelley's father, refused to publish the work probably because of its subject matter and its obvious autobiographical undertones.

Mary Shelley died of brain cancer on 1 February 1851, aged 53, in London and was interred at St. Peter's Churchyard in Bournemouth, in the English county of Dorset. At the time of her death, she was a recognized novelist.

The genesis of the Frankenstein story in 1816 has been a popular subject for filmmakers and appears in at least four films: