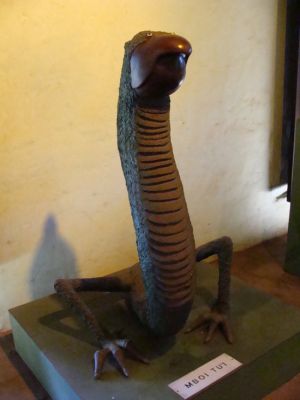 Mbói Tu'i is one of the seven legendary monsters of Guaraní mythology.

Mbói Tu'i is the second son of Tau and Kerana and is considered the protector of aquatic animals and the wetlands.

Mbói Tu'i has the form of an enormous serpent with a huge parrot head and a huge beak. He also has a red, forked tongue the color of blood. His skin is scaly and streaked. Feathers cover his head. He has a harmful look that frightens everyone who has the bad luck to be found with him.

Mbói Tu'i patrols the swamps and protects amphibian life. He enjoys the humidity and flowers and is said to let out an incredible powerful and terrible squawk which can be heard from very far off. This instills terror in all who hear it.