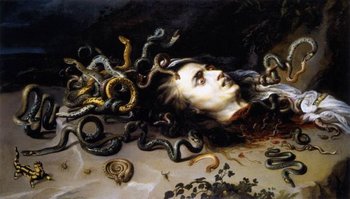 The Head of the Medusa by Pieter Pauwel Rubens, from 1617. It shows the severed head of the mythological monster.

Medusa is a gorgon but unlike her sisters, was a mortal. Born beautiful, Medusa was seduced by Poseidon, disguised as a horse, in one of Athena's temples. Athena became incensed and turned Medusa into a fearsome winged creature. Originally, Medusa was depicted as a horse with wings, then a woman with equine hindquarters and wings on her hair. At a later date, portraits of her reveals that her teeth were transformed into the tusks of a wild boar, her black tongue protruded and became too large for her mouth, her hands became brazen claws and her wings were changed into serpents.

Originally, Medusa was depicted as a horse with wings, then a woman with equine hindquarters and wings on her hair. At a later date, portraits of her reveals that her teeth were transformed into the tusks of a wild boar, her black tongue protruded and became too large for her mouth, her hands became brazen claws and her wings were changed into serpents.

Medusa was a Gorgon, one of three sisters and daughters of ancient, pre-titan gods, Phorcys and Ceto.

The sisters Sthenno and Euryale were immortal but the third, Medusa, was mortal. All three were so hideous (“not to be approched and not to be described” according to Hesiod) that the mere shock of seeing them would turn anyone to stone. Medusa is called The Gorgon or simply, Gorgon. She is also the “Mistress of the West Gate of Death” because her home lay at the entrance to the Underworld on the side of the western Ocean. She is the Krone Goddess in her most terrible aspect

Perseus was dispatched to kill Medusa, because he needed her head to fulfill a boastful gift to the King Polydectes, who held Perseus' mother, Danae, as his future queen against her will. Once Perseus beheaded Medusa with some help from Athena (who guided his hand) and Hermes, two monsters sprang from the drops of her blood.

There are supposed to be the children of Poseidon : one was Pegasus, the winged horse, and the other was the warrior Chrysaor (the father of the monster Geryon) with the golden sword. Perseus managed to escape the two other Gorgons thanks to the winged sandals of Hermes and the Helm of Hades (helmet of invisibility).

While Perseus was returning across the desert of Lybia, drops of blood fell on the ground from the severed head and were transformed by Gaia into venomous snakes of many kinds

The blood of the Gorgon had other special powers. The one that flowed on the right side had the power to reanimate the dead and was used by Erichthonius. The one that flows on the left side was a lethal poison and was kept by Athena who earned the nickname of “Instigator of wars”

The decapitated head of Medusa was used by Perseus to kill the sea monster Cetus. He then gave the head to Athena who fixed it in the middle of her Aegis or impenetrable shield and used it during the Troyan war. The Medusa shield of Athena was a favourite theme for armourers and sculptors in ancient times and in the Renaissance.

Gorgons symbolize the female genitals and the "devouring" female sexuality behind them. The original Gorgoneion may have only been a head. It has been suggested that the body was added for the purpose of enabling Medusa to be killed, not only as a means of explaining the origin of this disembodied terror-head, but also to enact the conflict between man and his fears of a demonic female sexual energy.

In ancient Greece, ovens and kiln doors were embellished with Gorgon masks to frighten away children who could hurt themselves.