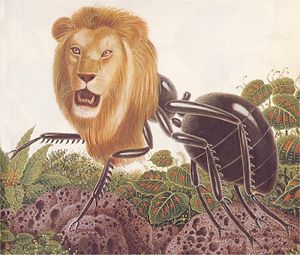 The Mermecolion or Ant-Lion is a legendary hybrid creature that appeared in medieval bestiaries. It is also referenced in some sources as a Formicaleon, Formicaleun, Myrmecoleon or Mirmicioleon.

Mermecolion is an inconceivable animal defined by Flaubert in this way: "lion in its foreparts, ant in its hindparts, with the organs of its sex the wrong way". Such a creature is short-lived.

In the Scriptures (Job IV: 11) we read: "The old lion perisheth for lack of prey." The Hebrew text has layish for lion; this word, an uncommon one for the lion, seems to have produced an equally uncommon translation. The Septuagint version, harking back to an Arabian lion that Aelian and Strabo call myrmex, forged the Mermecolion. After centuries, the origin of this was forgotten. Myrmex, in Greek, means ant; out of the puzzling words "The ant-lion perisheth for lack of prey" grew a fantasy (translated below by T. H. White) that medieval bestiaries succeeded in multiplying. Physiologus writers used the idea as an allegory for the instability of uncertainty.