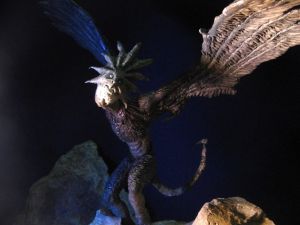 Minokawa is described as a gigantic bird that belongs to the dragons family.

A Bagobo tale explained that the Minokawa is a bird that is as big as an island. The feathers of this bird are like the sharp swords, its eyes are like mirrors while its beaks and legs are like steel.

According to the belief of the early people, eclipse occurs when the Minokawa swallows the sun. It is so big, lives in outer space and can gulp the sun, the moon and the earth.

Minokawa lives "outside the sky, at the eastern horizon". While the Baua lived "above the sky" because the Visayans believe that there is a cave called "calulundan" above the sky, the entrance covered by blue smoke.

A long time ago, a large bird known as Minokawa swallowed the moon. The people were too scared that they started to scream and made noises. The bird got curios on the noise so it glanced down to see what’s happening and opened its mouth. As a result, the moon jumped out and escaped.

The bird is as big as the island of Negros or Bohol. Minokawa’s beak and claws are like steel, its eyes are mirrors and its feathers are like sharp sword. It lives outside the sky and aims to snatch the moon. However, after failed efforts the Minokawa would travel and haunt the earth. 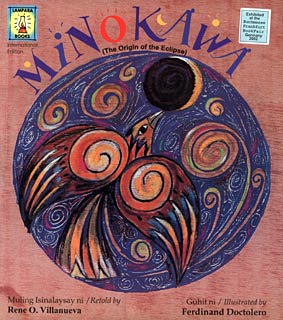 Minokawa (The Origin of the Eclipse as retold by Rene O. Villanueva and illustrated by Ferdinand Doctolero.