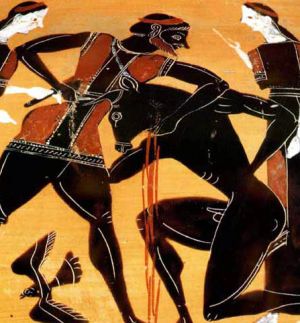 In Greek mythology, the Minotaur (Greek: Μινόταυρος, Minótauros) is a monstrous double, sometimes with the head of a bull and the body of a man or, conversely, with the body of a bull and the head of a man. In Greek mythology, the Minotaur was a creature that was part man and part bull. It dwelt in the Labyrinth, which was an elaborate maze constructed for King Minos of Crete and designed by the architect Daedalus to hold the Minotaur. The actual historical site of Knossos is usually identified as the site of the labyrinth. The Minotaur was eventually killed by Theseus.

"Minotaur" is Greek for "Bull of Minos". The bull was also known as Asterius or Asterion, a name shared with Minos's foster father.

This creature was born of Pasiphae, Minos' wife, the king of Crete and a white bull sent by Poseidon who was angry with Minos. Minos was so disgusted and embarrassed by his wife and the Minotaur that he ordered Daedalus to hide them. Daedalus built a maze called the Labyrinth where they were to live and never escape. One of Minotaur's half brothers ordered that seven youths and seven maidens from Athens be let into the maze every ninth year to feed the Minotaur. The Minotaur survived by capturing and eating these youngsters because they could not find their way out of the maze.

The Minotaur is linked to the cult of the bull and the double axe in the primitive tribes of Cretia.

Before he ascended the throne of Crete, Minos struggled with his brothers for the right to rule. Minos prayed to Poseidon to send him a snow-white bull, as a sign of approval by the gods for his reign. He promised to sacrifice the bull as an offering, and as a symbol of subservience. A beautiful white bull rose from the sea, but when Minos saw it, he coveted it for himself. He assumed that Poseidon would not mind, so he kept it and sacrificed the best specimen from his herd instead. When Poseidon learned about the deceit, he made Pasipha, Minos' wife, fall madly in love with the bull. She had Daedalus, the famous architect, make a wooden cow for her. Pasipha climbed into the decoy and fooled the white bull. The offspring of their lovemaking was a monster called the Minotaur.

The creature had the head and tail of a bull on the body of a man. It caused such terror and destruction on Crete that Daedalus was summoned again, but this time by Minos himself. He ordered the architect to build a gigantic, intricate labyrinth from which escape would be impossible. The Minotaur was captured and locked in the labyrinth. Every year for nine years, seven youths and maidens came as tribute from Athens. These young people were also locked in the labyrinth for the Minotaur to feast upon.

When the Greek hero Theseus reached Athens, he learned of the Minotaur and the sacrifices, and wanted to end this. He volunteered to go to Crete as one of the victims. Upon his arrival in Crete, he met Ariadne, Minos's daughter, who fell in love with him. She promised she would provide the means to escape from the maze if he agreed to marry her. When Theseus did, she gave him a simple ball of thread, which he was to fasten close to the entrance of the maze. He made his way through the maze, while unwinding the thread, and he stumbled upon the sleeping Minotaur. He beat it to death and led the others back to the entrance by following the thread.

Theseus was aided by one of Minos' daughters, Ariane, who gave Theseus a magical ball of thread, made by Daedalus, to retrace his path once he found and killed the Minotaur. Theseus was successful in his attempt in killing the Minotaur and escaping the Labyrinth. On the way back, Theseus abandoned Ariane on Naxos Island and provoked the death of his father, Egeus, because he forgot to put a white sail on his boat. Seeing a black sail, the king believed that his son has failed and been killed and in sign of despair throw himself into the sea. Then it became known as the Aegean Sea.

Minos, angry that Theseus was able to escape, imprisoned Daedalus and his son Icarus in the labyrinth. They were able to escape by building wings for themselves, but Icarus died during the escape as he flew too high and the wax which held the feathers in the wing melted as it was closer to the Sun.

The literary myth satisfied a Hellenic interpretation of Minoan myth and ritual. According to this, before Minos became king, he asked the Greek god Poseidon for a sign, to assure him that he, and not his brother, was to receive the throne. Poseidon agreed to send a white bull on condition Minos would sacrifice the bull to the god in return. Indeed, a bull of unmatched beauty came out of the sea. King Minos, after seeing it, found it so beautiful that he instead sacrificed another bull, hoping that Poseidon would not notice. Poseidon was very angry when he realized what had been done, so he caused Minos's wife, Pasiphae, to be overcome with a fit of madness in which she fell in love with the bull. Pasiphae went to Daedalus for assistance, and Daedalus devised a way for her to satisfy her passions. He constructed a hollow wooden cow covered with cowhide for Pasiphae to hide in and allow the bull to mount her. The result of this union was the Minotaur (the Bull of Minos), who some say bore the proper name Asterius (the Starry One). In some accounts, the white bull went on to become the Cretan Bull captured by Heracles as one of his labours.

The Minotaur had the body of a man and the head and tail of a bull. Pasiphae nursed him in his infancy, but he grew and became ferocious. Minos, after getting advice from the Oracle at Delphi, had Daedalus construct a gigantic labyrinth to hold the Minotaur. It was located under Minos' palace in Knossos.

Now it happened that Androgeus, son of Minos, had been killed by the Athenians, who were jealous of the victories he had won at the Panathenaic festival. Others say he was killed by the Cretan bull at Marathon (his mother's former taurine lover) which Aegeus, king of Athens, had commanded him to slay. To avenge the death of his son, Minos waged war and won. He then demanded that seven Athenian youths and seven maidens, drawn by lots, be sent every ninth year (some accounts say every year) to be devoured by the Minotaur. When the third sacrifice came round, Theseus volunteered to go to slay the monster. He promised to his father, Aegeus, that he would put up a white sail on his journey back home if he was successful. Ariadne, in the Greek version the daughter of Minos, fell in love with Theseus and helped him get out of the labyrinth by giving him a ball of thread, allowing him to retrace his path. Theseus killed the Minotaur (with a magical sword Ariadne had given him) and led the other Athenians back out of the labyrinth.[1] However Theseus forgot to change the black sails of mourning for white sails of success, so his father, overcome with grief, leapt off the clifftop from which he had kept watch for his son's return every day since Theseus had departed into the sea. Then it became known as the Aegean Sea.

Minos, angry that Theseus was able to escape, imprisoned Daedalus and his son Icarus in the labyrinth. They were able to escape by building wings for themselves, but Icarus died during the escape as he flew too high and the wax which held the feathers in the wing melted as it was closer to the Sun.

The contest between Theseus and the Minotaur was frequently represented in Greek art. A Knossian didrachm exhibits on one side the labyrinth, on the other the Minotaur surrounded by a semicircle of small balls, probably intended for stars; it is to be noted that one of the monster's names was Asterius.

The ruins of Minos' palace at Knossos have been found, but the labyrinth has not. The enormous number of rooms, staircases and corridors in the palace has led archaeologists to believe that the palace itself was the source of the labyrinth myth. Homer, describing the shield of Achilles, remarked that the labyrinth was Ariadne's ceremonial dancing ground.

Some modern mythologists regard the Minotaur as a solar personification and a Minoan adaptation of the Baal-Moloch of the Phoenicians. The slaying of the Minotaur by Theseus in that case indicates the breaking of Athenian trinutary relations with Minoan civilization|Minoan Crete.

According to A. B. Cook, Minos and Minotaur are only different forms of the same personage, representing the sun-god of the Cretans, who depicted the sun as a bull. He and J. G. Frazer both explain Pasiphae's union with the bull as a sacred ceremony, at which the queen of Knossos was wedded to a bull-formed god, just as the wife of the Tyrant in Athens was wedded to Dionysus. E. Pottier, who does not dispute the historical personality of Minos, in view of the story of Phalaris, considers it probable that in Crete (where a bull-cult may have existed by the side of that of the double axe) victims were tortured by being shut up in the belly of a red-hot brazen bull. The story of Talos, the Cretan man of brass, who heated himself red-hot and clasped strangers in his embrace as soon as they landed on the island, is probably of similar origin.

A historical explanation of the myth refers to the time when Crete was the main political and cultural potency in the Mediterranean sea. As the fledgling Athens (and probably other continental Greek cities) was under tribute to Crete, it can be assumed that such tribute included young men and women for sacrifice. This ceremony was performed by a priest disguised with a bull head or mask, thus explaining the imagery of the Minotaur. It may also be that this priest was son to Minos.

Once continental Greece was free from Crete's dominance, the myth of the Minotaur worked to distance the forming religious consciousness from Minoan beliefs.

The myth of the Minotaur centers on the white bull, imprisoned in the labyrinth at Crete, which was created from the sea by Poseidon. Being neither fully human, animal, or god, the ambiguity of the figure of the Minotaur placed it outside the conventional bounds of norms of morals and reason. The monstrous double became important to the European surrealist movement because its mythology inscribed both the violence of the last sacrificial rites and cultural alterity (part bull/part man) as the foundational text of western society.

Albert Skeer's review, Minotaure, which appeared from 1933 to 1939, was not only an extraordinary demonstration of the surrealist imagination, but, in its privileging of the mythic figure of the minotaur as the principal theme of its covers (by Derain, Bores, Duchamp, Ernst, Miro, Dali, Matisse, Magritte, Masson, and Rivera).

Part of this article consists of modified text from Wikipedia, and the article is therefore licensed under GFDL.
Retrieved from "https://www.monstropedia.org/index.php?title=Minotaur&oldid=15456"
Categories: