Mistral's Kiss is the fifth novel in the Merry Gentry series by Laurell K. Hamilton. 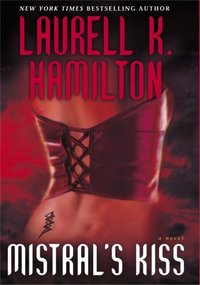 The series has revolved around a conflict between title character, faerie princess Meredith NicEssus, and her cousin, Cel. Cel's mother, Queen Andais, has promised that the first of the two cousins to produce a child will become ruler of the Unseelie Court. Mistral's Kiss continues to follow Meredith's attempts to bear a child and to avoid Cel's various schemes.

Picking up where the previous novel, A Stroke of Midnight, left off, Meredith and company are still holed up in the underground fairy mound of the Unseelie Court, with the princess still trying to get pregnant. Mistral, one of the queen's guards, is on temporary loan to Meredith after the recent attempt on her life. The powers that they stir up affect some serious changes in the land of faerie, none of which make Queen Andais happy. Sholto, King of the Sluagh, comes to terms with Merry and awakens the Wild Hunt. Again, the book takes place in approximately one day.

Part of this article consists of modified text from Wikipedia, and the article is therefore licensed under GFDL.
Retrieved from "https://www.monstropedia.org/index.php?title=Mistral%27s_Kiss&oldid=8437"
Categories: