Momo is a cryptid hominid, similar to the Bigfoot, which is reported to live in Missouri. 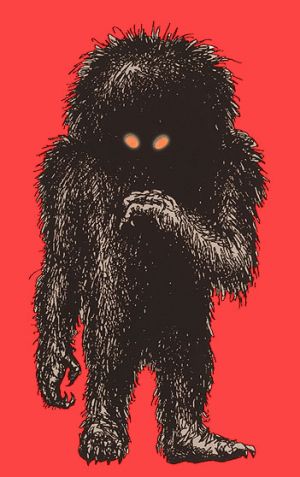 The name Momo is short for 'Missouri Monster'.

Momo is tall hominid creature (2.2m/7ft) reported to have a large, pumpkin-shaped head, with a furry body, and hair covering the eyes. It is said to eat dogs and emits a terrible odor, leading some to suggest it was a rogue black bear.

First reported in July 1971, near Louisiana, Missouri by Joan Mills and Mary Ryan, Momo has been spotted up and down the Mississippi River. Following sightings in 1972 beginning at at 3:30 p.m. July 11, first reported by Terry, Wally, and Doris Harrison, and lasting for about 2 weeks, tracks were found and submitted to Lawrence Curtis, director of the Oklahoma City Zoo and Botanical Garden. He deemed the tracks to be a hoax.[1] Prior to the Momo sightings, reports of similar creatures went back as far as the 1940s. A similar creature was reported in Michigan in 1964, as well as in Monroe, Michigan on August 13, 1965.