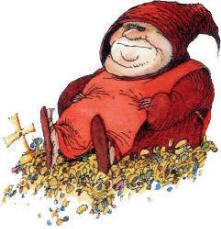 The Monaciello, or Little Monk is a house-spirit in the Napolitan Folklore.

The Monaciello is usually depicted as a short thick kind of little man dressed in the long garments of a monk with a broad brimmed hat.

According to the tradition, the precise place where it dwells does not appear to be accurately known; but it is reasonably supposed to be in some of those remains of Abbeys and Monasteries that crown many of the hills of this area. He is an expert in the underground passages of Naples, and goes through them in order to attend old palaces and of course causes much annoyance. The Villa Gallo at Naples is said to be haunted by one of these gentlemen. He is also fond of playing tricks: to pull clothes off people, to steal quilts from bedrooms, to harass housewives.

The Monaciello is thought to be a beneficent spirit; he appears to people always at the dead of night, only to those who are in sorest need, who themselves have done all that they could do to prevent or alleviate the distress that had befallen them, and after all human aid had failed. He mutely beckons to them to follow him.

If they have courage to do so, he leads them to some place where treasure is concealed, stipulating no conditions for its expenditure, demanding no promise of repayment, exacting no duty or service in return; it is not known if this treasures are the fruits of ill-got gains or the fruits of peaceful industry treasured up for occasions of love and charity.

Several are said to have made sudden fortunes through him, and hence when anyone has had a sudden increase of fortune they say Forse avrà il Monaciello in casa (perhaps he has had the little Monk in his house).

This beneficent household demon may also be propitiated by food which they expect to see converted into gold; but he must not boast of such supernatural gifts, else they vanish as they come. It is believed that treasure suffices for the requirements of those who received it.

The habits of this Monaciello are similar to those of the water carrier in ancient Naples. There were a lot of tunnels underground that connected all the wells in town and the water carriers had to be short people in order to pass through them. By mean of these tunnels, they had access to most houses, and also their overalls resembled the garments of the monks.

"The people of Naples, we are told, believe in a being very much resembling the Incubo, whom they call the Monaciello, or Little Monk. They describe him as a short, thick kind of little man, dressed in the long garments of a monk, with a broad-brimmed hat. He appears to people in the dead of the night, and beckons to them to follow him. If they have courage to do so, he leads them to some place where treasure is concealed. Several are said to have made sudden fortunes through him. In the Neapolitan story-book, named the Pentamerone, of which we shall presently give an account, we meet with a Monaciello of a very different character from this guardian of hidden treasure.

In the second tale of the first day of that work, when the prince in the night heard the noise made by the Fairy in his room, “he thought it was some chamber-boy coming to lighten his purse for him, or some Monaciello to pull the clothes off him.” And in the seventh tale of the third day of the same collection, when Corvetto had hidden himself under the Ogre’s bed to steal his quilt, “he began to pull quite gently, when the Ogre awoke, and bid his wife not to pull the clothes that way, or she’d strip him, and he would get his death of cold.” “Why, it’s you that are stripping me,” replied the Ogress, “and you have not left a stitch on me.” “Where the devil is the quilt?” says the Ogre; and putting his hand to the ground, he happened to touch the face of Corvetto, and immediately began to shout out, “The Monaciello, the Monaciello, hola! candles! run, run!” Corvetto, meanwhile, got off with his prize through the window.

It is quite clear that the Monaciello is the same kind of being as the House-spirit of the Gotho-German nations. He seems to belong peculiarly to Naples, for we have not heard of him in any other part of Italy. Now we are to recollect that this was the very place in which the Normans settled, and so he may be their Nis or Kobold; or, as he is so very like the Spanish Duende, he may be that being introduced by the Aragonese, who seem to have exercised so much influence over the language and manners of the people of Naples."