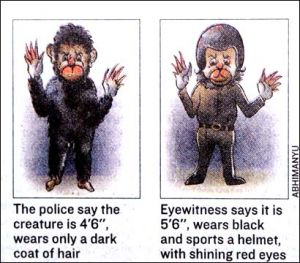 Police artist's impression of the Monkey Man of New Delhi

The Monkey Man of New Delhi is a strange monkey-like creature that was appearing at night and attacking people in New Delhi, India in 2001.

Eyewitness accounts were often inconsistent, but tend to describe the creature as about four feet (120 cm) tall, covered in thick black fur, with metal helmet and claws, glowing red eyes and three buttons on its chest. Other have described it as a bandaged figure, or as a helmeted thing.

The Monkey man is strong and agile, can see in the dark and said to be able to shapeshift (into a feline).

Many people reported being scratched, and two (by some reports, three) people even died when they leapt from the tops of buildings or fell down stairwells in a panic caused by what they thought was the attacker. At one point, exasperated police even issued artist's impression drawings in an attempt to catch the creature. Many people today still believe this "monkey man" continues to haunt the streets.

Three thousand extra men in Delhi were assigned by police, as of May 21, to track down the Monkey Man. Police also offered a reward equaling $1,065 U.S. dollars (in rupees) for the creature's capture. However, the creature has never been caught or even photographed.

Villagers in Assam have been terrorized by a wolflike Bear Man. As of May 27, more than a dozen people claimed they were attacked by it. The creature is alleged to make itself invisible before its attacks, and it is said to vanish when trapped in a ray of light. The Army, after investigation, could not substantiate any of these peoples' claims. The Assam Science Society, likewise, dismissed any such creature's existence in the district.

Part of this article consists of modified text from Wikipedia, and the article is therefore licensed under GFDL.
Retrieved from "https://www.monstropedia.org/index.php?title=Monkey-man_of_New_Delhi&oldid=11421"
Categories: