The Moon rabbit, also called the Jade Rabbit , is a rabbit that lives on the moon in East Asian folklore. In Chinese folklore, it is often portrayed as a companion of the moon goddess Chang'o, constantly pounding the elixir of life for her; but in Japanese versions it is just pounding mochi. 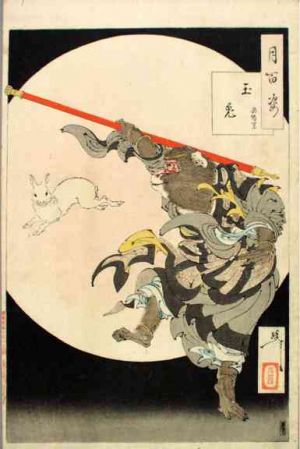 The earliest records suggesting that there is a rabbit on the moon appears in the Warring States period in ancient China. The Chu Ci, a Western Han anthology of Chinese poems from the Warring States period, notes that along with a toad, there is a rabbit on the moon who constantly pounds herbs for the immortals. This notion is supported by later texts, including the Imperial Readings of the Taiping Era encyclopedia of the Song Dynasty. Han Dynasty poets call the rabbit on the moon the Jade Rabbit or the Gold Rabbit, so in the days of old people also use the words "Jade Rabbit" and "Gold Rabbit" to refer to the moon.

The reason why a rabbit is on the moon is described in the Buddhist story "Sasajâtaka", where a monkey, an otter, a jackal, and a rabbit were friends. Together they resolved to practise charity on the Uposatha day (the day of fast), that was to occur on the following day. In the tradition it was believed that one who stood fast in moral practice and alms-giving on that day would earn a great reward. When an old man begged for food, the monkey was able to gather fruits from the trees, the otter was able to gather dead fish from the river bank, the jackal wrongfully pilfered a lizard and a pot of milk-curd from somebody’s house. The rabbit, wanting to offer something acceptable to the man, was only able to gather grass, and therefore offered its own body instead, and threw itself into a fire that the man built. The rabbit however did not get burned. The old man then revealed himself to be Sakra, and being touched by the rabbit's virtue, build for him a palace on the Moon. There he can be seen still with a mortar and pestle busily pounding away and making the Elixir of Immortality for the gods (and sometimes rice flour to make moon cakes for the Mid-Autumn Festival).

It is said that the smoke-like substance surrounding the lunar image is the smoke that rose when the rabbit cast itself into the fire.

In former days, a hare, a monkey, a coot, and a fox, became hermits, and lived in a wilderness together, after having sworn not to kill any living thing. The god Sakkria having seen this through his divine power, thought to try their faith, and accordingly took upon him the form of a brahmin, and appearing before the monkey begged of him alms, who immediately brought to him a bunch of mangoes, and presented it to him. The pretended brahmin, having left the monkey, went to the coot and made the same request, who presented him a row of fish which he had just found on the bank of a river, evidently forgotten by a fisherman. The brahmin then went to the fox, who immediately went in search of food, and soon returned with a pot of milk and a dried liguan, which he had found in a plain, where apparently they had been left by a herdsman. The brahmin at last went to the hare and begged alms of him. The hare said, 'Friend, I eat nothing but grass, which I think is of no use to you.' Then the pretended brahmin replied, 'Why, friend, if you are a true hermit, you can give me your own flesh in hope of future happiness.' The hare directly consented to it, and said to the supposed brahmin, 'I have granted your request, and you may do whatever you please with me.' The brahmin then replied, 'Since you are willing to grant my request, I will kindle a fire at the foot of the rock, from which you may jump into the fire, which will save me the trouble of killing you and dressing your flesh.' The hare readily agreed to it, and jumped from the top of the rock into the fire which the supposed brahmin had kindled; but before he reached the fire, it was extinguished; and the brahmin appearing in his natural shape of the god Sakkria, took the hare in his arms and immediately drew its figure in the moon, in order that every living thing of every part of the world might see it.

The gods assembled at Teotihuacán when yet no sun had shone and no dawn had broken and they debated who would become the sun. One of them Tecuciztecatl said, "O gods I shall be the one."

Again the gods asked, "Who else?" and there was one man, Nanahuatzin, listening among the others. They said to him, "You shall be the one, O Nanahuatzin". For these two, a hill was made – the pyramid of the sun and the pyramid of the moon and there they remained, performing penances for four nights and after lifting the penance, they were to do their labour. They were to become gods.

The gods said, "Take courage, O Tecuciztecatl. Cast thyself into the fire." and four times he tried but the heat was too great for him. Thereupon they cried out to Nanahuatzin, "Onward, thou, O Nanahuatzin. Do not be afraid." All at once he quickly threw and cast himself upon the fire and burned. When Tecuciztecatl saw this then he also jumped into the fire.

When Nanahuatzin came to rise, he shone intensely and his brilliant rays penetrated everywhere. And afterwards Tecuciztecatl came to rise following behind him from exactly the same place – the east. And so they tell it, they were exactly equal in their appearances as they shone and the the gods became worried.

Suddenly, one of them came out running. With a rabbit he came to wound the face of Tecuciztecatl and with it he darkened his face so that he could never be a bright as the sun.

And so does it appear today. 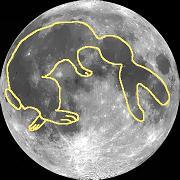 The shape of the rabbit on the Moon.

The legends would be based on the traditional pareidolia that identifies the markings of the moon as a rabbit pounding in a mortar.

A popular culture manifestation of this tradition can be found in the character title character of Sailor Moon, whose name is Usagi Tsukino, a Japanese pun on the words "rabbit of the moon." Also, in the dojin game Imperishable Night, a moon rabbit named Reisen Udongein Inaba is the boss of the fifth stage.

The moon rabbit was also mentioned in the conversation between Houston and the Apollo 11 crew just before the first moon landing:

Houston: Among the large headlines concerning Apollo this morning there's one asking that you watch for a lovely girl with a big rabbit. An ancient legend says a beautiful Chinese girl called Chang-o has been living there for 4000 years. It seems she was banished to the moon because she stole the pill for immortality from her husband. You might also look for her companion, a large Chinese rabbit, who is easy to spot since he is only standing on his hind feet in the shade of a cinnamon tree. The name of the rabbit is not recorded.