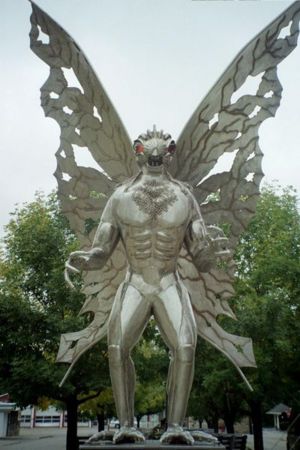 This 12 foot tall, stainless steel sculpture of the Mothman by artist Robert Roach is in downtown Point Pleasant.

Mothman was the name given to a strange creature thought to have been sighted many times in the Point Pleasant area of West Virginia, on the border with Ohio between November 1966 and November 1967. Some observers described the creature as a man-sized beast with wings and large reflective red eyes, while others claimed that the creature possessed luminous eyes. A number of hypotheses have been put forward to explain what people reported, ranging from paranormal phenomena to owls, but no definitive explanation seems likely at this time. 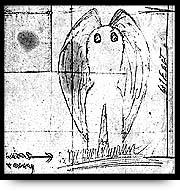 An eyewitness's sketch of Mothman

The Mothman creature, named in parallel to the Batman TV series that was popular at the time, was first sighted November 12, 1966. A group of five men were preparing a grave in a cemetery close to Clendenin, West Virginia when what they described as a "brown human shape with wings" lifted off from behind nearby trees and flew over their heads. However, this sighting was not made public until later, and the first sighting described in the media took place three days later.

Late at night on November 15, two young married couples from Point Pleasant, Roger and Linda Scarberry and Steve and Mary Mallette, were out for a drive in the Scarberrys' car. They were passing a World War II TNT factory about seven miles outside of Point Pleasant, in the 2,500 acre (10 km²) McClintic Wildlife Station, when they noticed two red lights in the shadow by an old generator plant near the gate of the factory. They stopped the car and were startled to see that the lights were the glowing red eyes of a large animal, "shaped like a man, but bigger, maybe six and a half or seven feet tall, with big wings folded against its back," according to Roger Scarberry. Terrified, the couples drove off in their car, heading for Route 62. Going down the exit road, they saw the creature again, standing on a ridge near the road. It spread its wings and took off, following their car to the city limits. They went to the Mason County courthouse and told their story to Deputy Millard Halstead, who later said "I've known these kids all their lives. They'd never been in any trouble and they were really scared that night. I took them seriously." He followed Roger Scarberry's car back to the TNT factory, but found no sign of the strange creature. According to the book Alien Animals, a poltergeist attack on the Scarberry home took place later that night, in which the creature was seen several times.

The next night, November 16, local townspeople, armed, went searching the area around the old TNT plant for signs of Mothman. Mr. and Mrs. Raymond Wamsley and Mrs. Marcella Bennett with her baby daughter Teena were in a car on their way to visit their friends, Mr. and Mrs. Ralph Thomas, who lived in a bungalow among the "igloos" (concrete dome-shaped structures erected for explosives storage during WWII) close to the TNT plant. The igloos were now empty, some owned by the county, some by companies intending to use them for storage. They were headed back to their car when a figure appeared behind their parked car. Mrs. Bennett said it seemed like it had been lying down, slowly rising up from the ground, large and gray, with glowing red eyes. While Wamsley phoned the police, the creature walked onto the porch and peered in through the window at them.

On November 24, four people saw it flying through the air over the TNT area. On the morning of November 25, Thomas Ury, who was driving along Route 62 north of the TNT, who said he saw the creature standing in a field by the road, then spread its wings and took off, following his car as he sped into Point Pleasant to report it to the sheriff.

On November 26, Mrs. Ruth Foster of the Charleston, West Virginia suburb of St. Albans saw Mothman standing on her front lawn, but it was gone when her brother-in-law went out to look. On the morning of November 27, it pursued a young woman near Mason, West Virginia, and was reported again in St. Albans the same night, by two children.

After the first reports of the Mothman, strangers dressed in black began to appear in the area. These 'Men in Black' were believed to have been government agents investigating the occurrences of the Mothman, though some speculate that they were Catholic priests who came to exorcize the demonic creature.

The Mothman was seen again January 11, 1967, and several times during 1967. No sightings of the Mothman have been reported after the collapse of the Silver Bridge, when 46 people died in the tragic accident. The Silver Bridge was an eyebar chain suspension bridge that connected the cities of Point Pleasant, West Virginia and Gallipolis, Ohio over the Ohio River. It was built in 1928, named for its aluminum paint, and collapsed on December 15, 1967, killing 46 people; investigation of the wreckage pointed to the failure of a single eye-bar in a suspension chain due to a small flaw that was introduced at the time it was made.

Some local residents link the collapse of the bridge with sightings of the Mothman near the bridge. 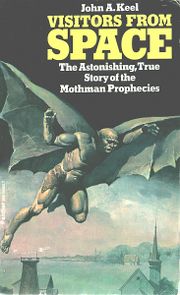 1976 British edition of The Mothman Prophecies.

There are several theories for what the Mothman phenomena involved.

The largest collection of material about Mothman is found in John Keel's 1975 book The Mothman Prophecies, in which Keel lays out the chronology of Mothman and what he claims to be related parapsychological events in the area, including UFO activity, Men in Black encounters, poltergeist activity, and the December 15, 1967, collapse of the Silver Bridge across the Ohio River. The book was the basis of a 2002 movie starring Richard Gere, directed by Mark Pellington.

Loren Coleman, in the 2002 book Mothman and Other Curious Encounters (focusing on the details of cryptozoology investigations), acknowledges Keel's "demonological" approach. Coleman first wrote about "winged weirdies" in articles and his 1978 book, Creatures of the Outer Edge.

Some of the explanations given for Spring Heeled Jack, which was sighted during the Victorian era in England, may possibly also be applied to the Mothman.

Skeptics have argued (notably in the March/April 2002 issue of the magazine Skeptical Inquirer) that the most likely explanation of the sightings is excited eyewitnesses mistaking a barn owl for a winged monster. Others have argued that the most likely candidate is the Great Horned Owl, the largest owl known to breed in West Virginia. The Great Grey Owl, a rare winter visitor to the lower forty-eight states, is the largest owl in North America, and could possibly have been the figure behind some of the mothman sightings. Another possibility is the misidentification of a sandhill crane. Seeing either a sandhill crane or a great grey owl in West Virginia would be a rare, but by no means impossible, experience.

Mark A. Hall in his book Thunderbirds disputes the owl theory, but instead suggests a giant cryptid owl species, allegedly seen in the area for over 100 years.

In the Cthulhu Mythos, originally created by H. P. Lovecraft, there is a race of aliens known as Byakhee. While the creatures were invented long before the actual Mothman sightings, it is interesting to note that the byakhee have many similarities to the mothmen. In the Cthulhu Mythos universe, it is possible that the byakhee were the basis for the mothmen sightings which also suggests that cults to Hastur the Unspeakable were present in Point Pleasant (Byakhee are known to serve Hastur and his cultists). During the Mothman flap, some evidence of animal mutilations and cult activities where found in Point Pleasant. John Keel proposed that Mothman may have been connected with such activities, but no evidence has been uncovered to confirm Keel's suspicions.

Another similarity between Mothman and creatures from the Cthulhu Mythos has to do with Mothman's reported ability to fly straight up into the air without flapping its wings. Both the mi-go and the elder things had leathery wings with anti-gravity properties, allowing them to fly like Mothman and even travel through outer space.

The Character Arthur from The Tick cartoon TV series wore a moth suit. Arthur was the side kick to lead super hero The Tick.