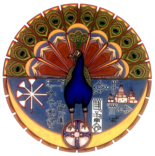 Tawûsê Melek (frequently known as Muluk Taus or Melek Taus in English publications) is the Peacock Angel in the Yazidi religion.

The reason for the Yazidis reputation of being devil worshipers is connected to the other name of Melek Taus, Shaytan, the same name the Koran has for Satan.

God first created Tawûsê Melek from his own illumination (Ronahî ) and the other six archangels were created later. God ordered them to bring him dust (Ax) from the Earth (Erd) and build the body of Adam. Then God gave life to Adam from his own breath and instructed all archangels to bow to Adam. The archangels obeyed except for Tawûsê Melek.

In answer to God, Tawûsê Melek replied, "How can I submit to another being! I am from your illumination while Adam is made of dust." Then God praised him and made him the leader of all angels and his deputy on the Earth. (This likely furthers what some see as a connection to the Islamic Shaytan, as according to the Quran he too refused to bow to Adam at God's command, though in this case it is seen as being a sign of Shaytan's sinful pride.)

Yazidis, however, believe Tawûsê Melek is not a source of evil or wickedness. They consider him to be the leader of the archangels, not a fallen angel. They also hold that the source of evil is in the heart and spirit of humans themselves, not in Tawûsê Melek. The active forces in their religion are Tawûsê Melek and Sheik Adî.